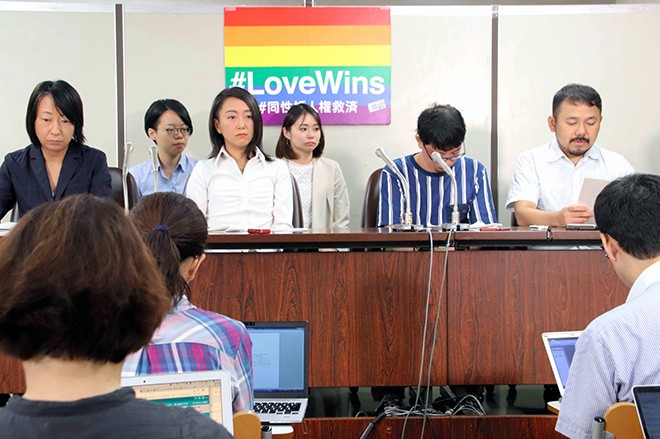 Claimants pushing for the legalization of same-sex marriage hold a news conference in Tokyo’s Kasumigaseki district on July 25 in response to the Japan Federation of Bar Associations release of its first written opinion on the issue. (Tomoko Yamashita)

In its first written opinion on the issue, the Japan Federation of Bar Associations called on the government July 25 to legalize same-sex marriage.

It contended that not doing so represents “critical human rights abuse under the Constitution.”

The lawyers' body scrutinized complaints filed by 453 gay people in 41 prefectures since 2015 who had sought redress for being discriminated against.

Some of them eventually withdrew their complaints for personal reasons.

The lawyers' federation said that denying marriage to gay people, with all the rights that such a contract entails, was an abuse of the freedom of marriage and equality under the law guaranteed by the Constitution.

With regard to Article 24 of the Constitution that states “marriage shall be based only on the mutual consent of both sexes,” the written opinion noted, “This provision is aimed at preventing intervention by a third party and not intended to ban same-sex marriage.”

However, many people still cling to the belief that marriage is a contract between a man and a woman who wish to raise children.

In response, the federation said, “Deciding whether to have children and raise them is guaranteed under Article 13 of the Constitution, which notes the right of self-determination, or reproductive health and rights.”

Thus, it concluded that there is no justification for not allowing same-sex marriages.

In response to the written opinion, four claimants and their lawyers held a news conference in Tokyo on July 25.

A lesbian in her 40s who lives in Tokyo with the partner she has been dating for 20 years said: “I hope people in future generations won't have to hide their loved ones and will be able to enjoy their lives openly. I want the government to enable gay marriage as soon as possible.”

Lawyer Takako Uesugi, a member of a lawyers group that advocates same-sex marriage, called the federation's written opinion a “powerful step forward" in legalizing the issue.

(This article was written by Tomoko Yamashita and Satomi Sugihara.)