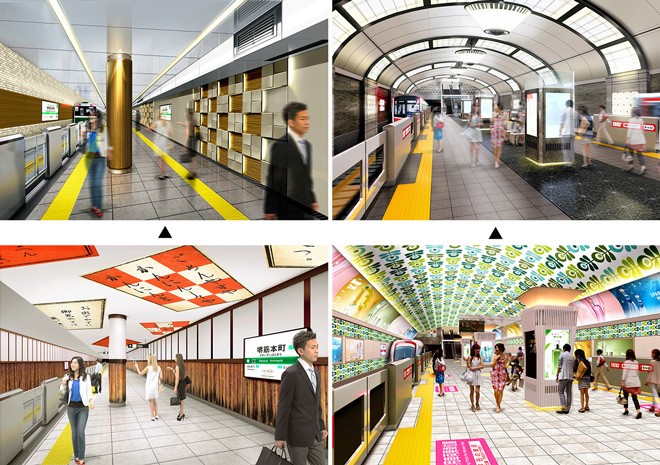 OSAKA--Osaka Metro Co. on Aug. 29 released a new version of five conceptual redesigns of 15 subway stations that it unveiled in December 2018 to much public scorn and ridicule.

The release came after citizens here unleashed a torrent of complaints upon the company over the proposed artwork, which was also heavily trashed in reviews.

Those lucky stations spared from a tacky makeover include: Shinsaibashi, Umeda, Nakatsu, and Dobutsuen-mae stations along the Midosuji Line, and Sakaisuji-Honmachi Station on the Chuo Line.

The new renderings of designs for these stations appear more restrained than their previous proposals.

The original redesign for Shinsaibashi Station was done under the concept of “textiles” to identify it as a fashion hub in the central area of the city where many department stores are located.

The public had no problem with the concept, just with how it turned out. The ceilings and walls ended up covered in eye-twisting, kaleidoscope-like patterns.

In the newly released and far-more subdued conceptual drawings, the colorful motifs are out, and simple LED light panels are in.

Similarly, in its initial drawings, Sakaisuji-Honmachi Station looked like a vaudeville theater, reflecting the surrounding Senba district of Osaka, a cultural center for townspeople. The designs for its ceilings bore slang spoken by locals.

In the new renderings, the station looks much calmer, featuring wood-tone walls.

“We set out to bring a unique characteristic to each station, but struggled to find a way to express it best,” said Hideaki Kawai, president of Osaka Metro.

“This time, we are able to present sophisticated renderings. I believe many people will support them.”

Redesign work at the five stations is expected to be completed by the end of fiscal 2021.

The company is also working on a redo of renderings for the remaining 10 stations, which are expected to be remodeled at a later time. The new images may be made public next year, it said.

Kawai at the time said the company wanted to create a carnival atmosphere at the stations so people could enjoy them more, rather than simply using them to get from point A to B.

However, public condemnation of the proposed designs was swift online and elsewhere, including posts such as, “They look cheap” and “How hideous!”

A college professor was so aghast by the proposed designs that he collected about 20,000 signatures to pressure the company to rethink the designs. He personally handed the signatures to Kawai in February.

In response to the onslaught, Osaka Metro conducted an online survey on the designs and gathered opinions from people who had complained about them.

The company then appointed Kiyoyuki Okuyama, an industrial designer who has worked on luxury cars such as Ferrari, as its chief design officer to come up with better designs.