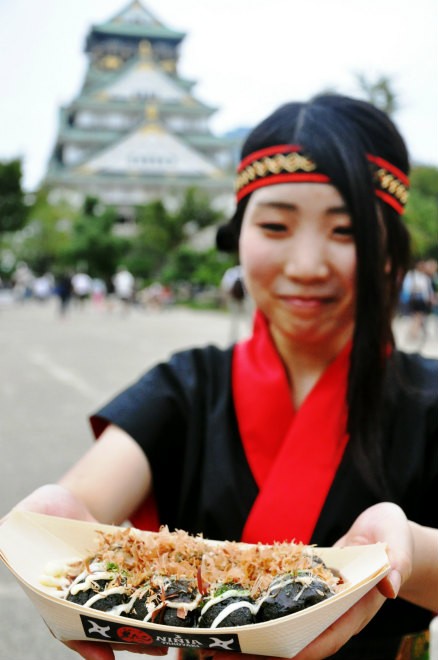 Sen no Rikyu (1522-1591), arguably one of the most prominent masters of the Japanese tea ceremony, sometimes served thin, crepe-like griddle cakes to his guests.

Called "funoyaki" according to records, they were an early form of "konamono" (or "konamon"), a kind of snack food made of a wheat flour-based batter cooked on a griddle.

"Rikyu's guests would have been pleasantly intrigued by the funoyaki's gooey texture, and Rikyu must have enjoyed watching their reaction," said Mana Kumagai, 57, who in 2003 founded the Nippon Konamon Association in Osaka.

The subject of Kumagai's dissertation at university was "takoyaki," a traditional ball-shaped snack containing bits of "tako" (octopus).

Having kept up her takoyaki research and published books over the years, Kumagai is committed to promoting Japan's konamon culture through the association she chairs.

The cultivation of wheat is said to have begun 10,000 years ago in central Asia. Wheat flour gave birth to noodles and gyoza dumpling wraps in the East, and pizza, bread and pasta in the West.

In Japan, funoyaki kick-started and popularized a griddle-cooked culinary tradition.

"Today, Japan is a 'konamon superpower' rivaled by none in the world," Kumagai asserted.

And the heart and soul of this food culture lies in the Kansai region, with its unique culinary tradition that evolved around "dashi" stock.

In the old days, "udon" soup noodle eateries flourished while Osaka Castle was under construction in the 16th century.

And Osaka became the birthplace of takoyaki in the early years of the Showa Era (1926-1989). After World War II, "okonomiyaki" savory pancakes became a local favorite.

With the 2019 G-20 Osaka Summit kicking off on June 28, I wonder if this occasion will serve to further promote the konamon culture to the rest of the world.

Once the talks start, there will certainly be scenes of tension and confrontation. But imagine the summiteers sitting around the table and everyone tucking into konamon.

Just as Rikyu's guests fell in love with funoyaki and Rikyu beamed at them, konamon may be just what's needed to melt tensions at the summit.