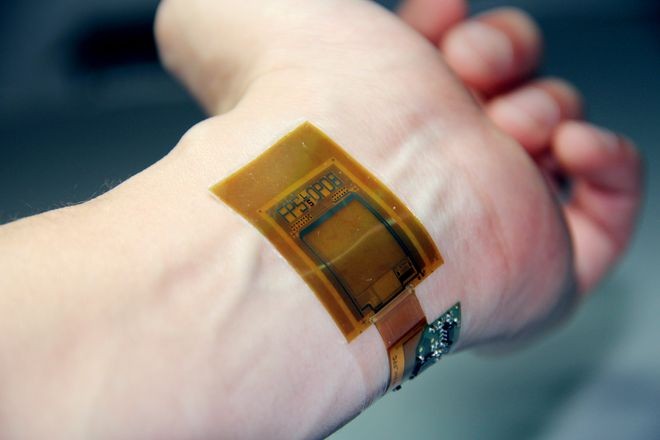 The extremely thin sensor sheet can be bent or pasted on an arm. (Provided by the University of Tokyo)

The scientists from the University of Tokyo and Japan Display Inc. said Jan. 21 that the sensor equipment works like a camera.

It consists of a thin film transistor and an optical sensor placed on a sheet. Development of the sensor was based on organic electroluminescence technology, they said.

“Both the high-resolution imaging and high-speed data readout were realized at the same time,” said Takao Someya, an electrical engineering professor at the university.

Although it was difficult to place the tiny parts on the thin sheet, the process was completed by lowering temperatures and improving the agent used in the manufacturing process.

The device is around 0.015 millimeter thick, and it can be bent or pasted on an arm.

“We will pitch the sensor to the market within three years or so,” said Akio Takimoto, a senior fellow at Japan Display’s R&D Division.

Under the plan, the sensor will be further refined to measure not only pulses but also blood sugar levels and blood oxygen content. The team is considering adopting a battery so the sensor can be used as a health care appliance for a prolonged period like a wristwatch.

The development was reported in the British scientific journal Nature Electronics at (https://nature.com/articles/s41928-019-0354-7).