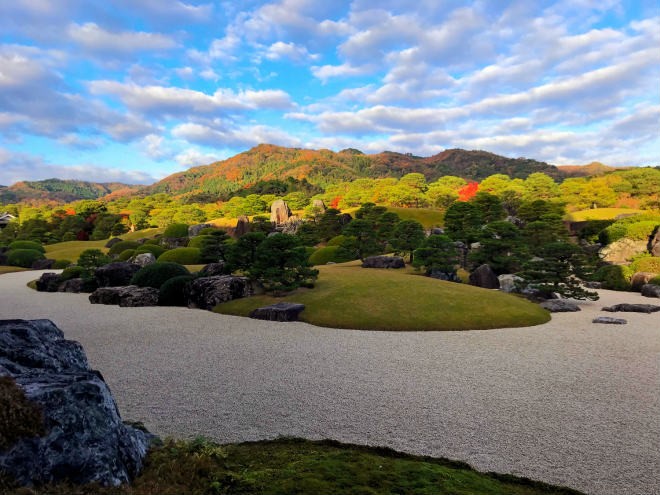 YASUGI, Shimane Prefecture--The sprawling gardens at the Adachi Museum of Art here were rated the nation's best for the 17th consecutive year in 2019 by the Journal of Japanese Gardening, a U.S. publication.

The Adachi museum garden is among seven in Shimane Prefecture that rank in the top 50 in Japan, according to the publication.

Rankings are determined by a committee of gardening experts, covering at least 900 gardens around the country.

According to the Adachi museum, it began creating the garden in 1968 and spent about 15 years laying out its basic form. The  garden encompasses an area of roughly 165,000 square meters and includes a mountain range that overshadows the site to serve as “shakkei” borrowed scenery.

"You can't create a garden that touches your heart unless you envision what it will be like in 10 or 30 years’ time," said museum director Takanori Adachi in a statement.

He also praised the gardeners and other staff for their day-to-day efforts, saying it was more imperative than ever to pay attention to maintenance and management of the gardens so they live up to their beauty, greatness and honor that has been bestowed on them.

The Katsura Imperial Villa in Kyoto Prefecture ranked second in the list, while the Minamikan ryokan in Matsue, also in Shimane Prefecture, took the No. 3 spot.

The other five gardens in Shimane Prefecture ranked in the top 50 in Japan included the Yushien garden in Matsue (25th), the Yunosuke's Hotel Chorakuen, also in the prefectural capital (28th), and Kokokuji temple in Izumo (29th).