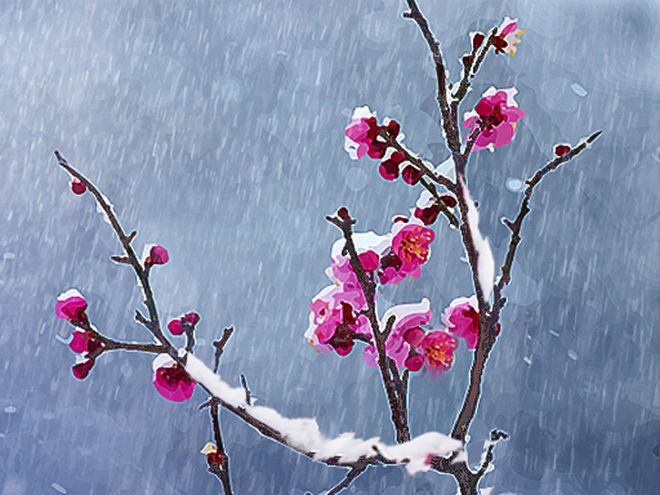 across the misty river

trapped in the mist

I walk past in dreams

the idea of love

veering off the marked trail to

get a closer view

under a snowy sky

holding on tight to

I too know the touch

where the road slopes up

voices of my being

“War is Over” on the

in the winter night

another inch of snow ...

I calculate a variation

drifts with the table

This haiku by Ririka Tanikawa, a medical student, was honorably mentioned for its pivotal second line in a contest held by Kagawa University. Writing from Beli Manastir, Croatia, Andelka Pavic reveals how one of the oldest known fruits ripens during the winter months. Luciana Moretto spotted an early sign of spring in Italy. Yoshiko Sato snuggled deeper into her down-filled duvet in Takamatsu, Kagawa Prefecture.

came out of the snow

to see the sun

my comforter tells me

Nose pressed against a window in Rijeka, Croatia, Mihovila Ceperic-Biljan wants to go outside. Serhiy Shpychenko couldn’t resist drawing a design for his neighbor to see in Kyiv, Ukraine. When Anne-Marie McHarg left her house in the early morning on the way to work in London, she said, “waiting for the bus, I see the moon between the trees. I can never feel lonely.” Mario Massimo Zontini witnessed a life and death game of hide and seek in Parma, Italy. Andy McLellan celebrated the Chinese New Year in Canterbury, U.K.

snuggled up to the window

on a snow-covered car

year of the rat

first snow on the field

beneath the picnic table

a purple pencil and

looking at the internet

When Anne-Marie McHarg caught a glimpse of a Japanese lady in full kimono dress walking down the road in London, she said it was so unusual that she looked twice and better understood the expression East meets West.

out of its scent

On the bamboo tree forest

they forgot to deadhead

Stephen J. DeGuire referred to the blood vessels that burst in myriad red dots and lines on the nose and face of a heavy alcohol drinker.

In 1913, Ezra Pound wrote this two-lined poem titled “In a Station of the Metro.”

The apparition of these faces in the crowd:

Petals on a wet, black bough.

Noticing small yellow and white flowers along the grassy paths toward San Gemini in Umbria, Italy, gave Daniela Misso an idea of what to pull from her freezer as soon as she got home.

decorations on a defrosted cake

The next issues of the Asahi Haikuist Network appear Feb. 7 and 21. Readers are invited to send haiku about camellia or magnolia on a postcard to David McMurray at the International University of Kagoshima, Sakanoue 8-34-1, Kagoshima, 891-0197, Japan, or by e-mail to (mcmurray@fka.att.ne.jp).