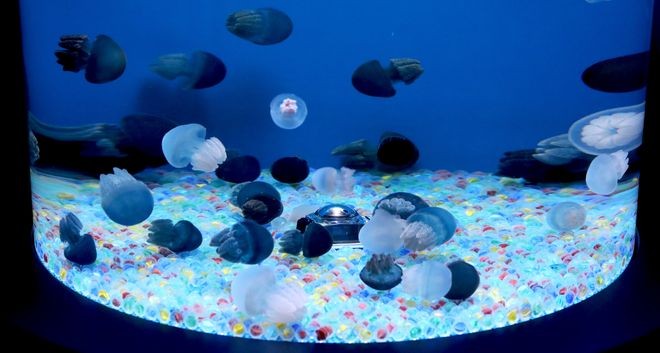 At first glance, the shell-shaped sea creatures threw themselves at the video camera from all around as if the camera were being battered by converging fire.

Contrary to expectations, jelly blubbers can swim fast. They collide with every object on their way, but they seem not to care; they even appear to be enjoying the impact.

About 30 jelly blubbers are kept on exhibition at Shinagawa Aquarium in Tokyo’s Shinagawa Ward.

Also known as the blue blubber jellyfish and the mosaic sea jelly, the jellyfish can be found in coastal parts of the Philippines and other Southeast Asian countries. They come in colors such as blue, white, deep blue and burgundy.

According to aquarium staffer Masashi Fukui, the colors are apparently derived from symbiotic algae. The algae provide photosynthetic energy generated from sunlight to the jellyfish as a nutritional source.

Because each individual pulsates and contracts its umbrella-shaped bell at its own rhythm, visitors can’t get enough of watching them swim.

Soon after the camera was put in the center of the water tank, the jelly blubbers were seen approaching the device as if they were interested in it.

But Fukui said jellyfish don’t have a brain. They simply free float in the water.

Jelly blubbers live about half a year, the staffer added.