360-DEGREE LIVES: Red lionfish may be ‘lady of the sea,’ but its sting packs venom 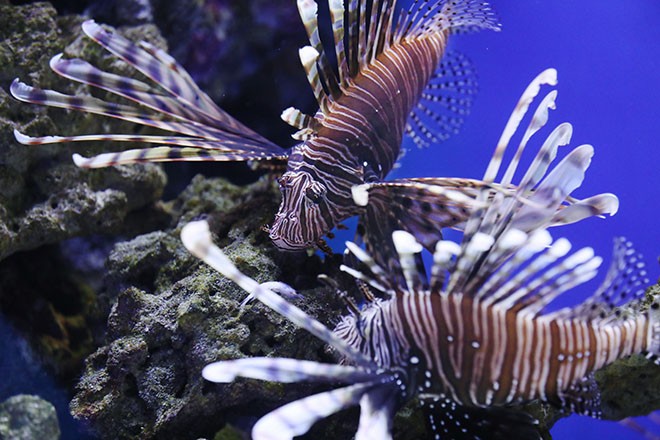 The red lionfish is an embodiment of the old saying "there's no rose without a thorn."

Although the fish flaunts long fins and swims gracefully, the “lady of the sea” has venomous spines on the fins protruding from its back, stomach and hip.

Its red-and-white stripes may look beautiful, but they are designed to warn enemies. The fish is basically gentle in nature, but when threatened, it spreads its fins to intimidate predators.

It can attack enemies by injecting venom from the spines on the tips of its fins. Humans will feel extreme pain when stung, and the affected area will be swollen and red.

According to zoo attendant Atsushi Sakaguchi, the red lionfish at the aquarium are also venomous. However, he placed a 360-degree camera inside the water tank with his bare hands.

The red lionfish usually stay behind rocks. They are timid and have a habit of retreating to areas to hide when approached by something unfamiliar, meaning that they rarely attack unless they feel threatened.

There is a small risk when tasks are carried out quickly by attendants familiar with its behavior, Sakaguchi said.

In Japan, red lionfish inhabit rock and coral reef areas in or south of Suruga Bay. They look similar to Luna lionfish, but their differences include having stripes in the chest area.

Its long fins are not suitable for swimming fast, but the fish can make the best use of them to corner prey. It is also breathtaking to see how fast it eats smaller fish as it opens its mouth wide and swallows them in one gulp.