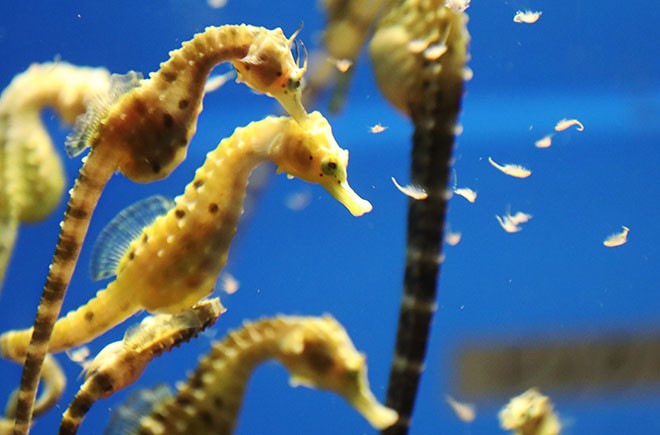 The behavior of male big-belly seahorses defies social norms in the human world.

Instead of sucking in their gut, they expand it to attract females. And they are largely responsible for child-rearing activities.

The big-belly seahorse doesn’t look like a member of the fish family. It has an appearance similar to a horse or dragon, with a long, thin body, snouted mouth and goggle eyes. Its dorsal and pectoral fins are constantly fluttering.

About 40 big-belly seahorses are kept at the Shinagawa Aquarium in Tokyo’s Shinagawa Ward.

They moved around gracefully, seemingly unalarmed by the video camera set up inside the tank. Some of them swam directly toward the lens, revealing faces somewhat similar to a giraffe’s.

Seahorses are carnivores and suck in their food, such as small crustaceans and fish.

Not a good swimmer, the big-belly seahorse is an ambush hunter that coils its tail around seaweed, corals and other growth and awaits its prey.

“Given its usual behavior, it moves faster than you can imagine only in the moment that it feeds,” aquarium attendant Masashi Fukui said.

Male big-belly seahorses are known as child-rearing fathers. The female lays eggs in the brood pouch on the male’s belly. He “gives birth” to the young after they have hatched inside the pouch, usually in spring and summer, Fukui said.

When they are nursing their brood, their bellies grow big. Males sometimes inflate their bellies with water to show off the size to females, he added.

Unfortunately, no males were seen with their brood in their bellies during the shooting.

The big-belly seahorse lives in the cold sea around southern Australia. They can grow up to 35 centimeters in length, and most of their bodies are covered by scale-like bony plates.