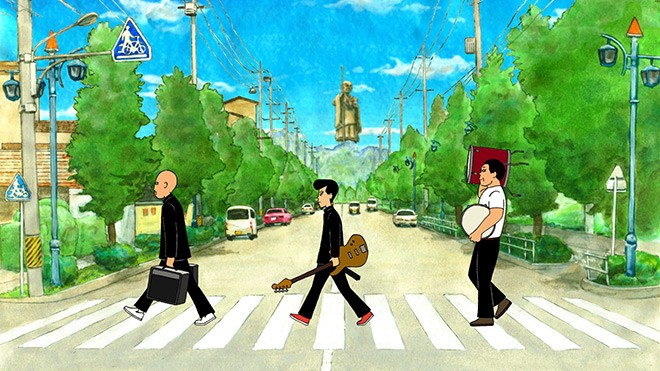 Kenji Iwaisawa became so engrossed in his animated film project that a collaborator began to worry about the director’s health.

Over seven painstaking years, Iwaisawa drew more than 40,000 illustrations by hand while still working a day job for living expenses.

But his Herculean effort, crammed into a 71-minute film, paid off in ways that surprised even Iwaisawa. His work, “On-Gaku: Our Sound,” won the top prize at an overseas anime festival.

The film was released theatrically in Japan on Jan. 11.

“On-Gaku” is based on a manga self-published by Hiroyuki Ohashi, a cult manga artist and actor.

The project kicked off when Iwaisawa, who had worked with Ohashi in the same place as part-timers, suggested the comic be turned into an animated film.

While the division of labor and CGI has become common for drawings in the animation industry, Iwaisawa was adamant about producing the movie almost single-handedly.

“I spent seven years on the project, allocating 80 percent of my time for production and 20 percent for a day job to earn minimum living expenses,” he said.

Iwaisawa said he insisted on hand-drawing because he thought the analog feel would stand out among films that rely heavily on CGI and other modern techniques.

He said he initially thought he could finish the work in three years. However, it took more than twice as long to complete.

“I helped him with supplies and gave advice, but there were times when I stopped hearing from him for a while,” Ohashi recalled. “I was worried about him on such occasions, thinking things like, ‘Is he all right?’ and ‘Is he sick?’”

“On-Gaku” is about a group of delinquent students who have too much time on their hands. They decide to form a band on a whim and end up playing at a music festival in their town.

The film has won praise for its character development as well as the laid-back dialogue.

A star-studded cast was assembled for the voices of the characters, including Ohashi’s musician friend Shintaro Sakamoto and actor Naoto Takenaka.

“On-Gaku” was submitted to the Ottawa International Animation Festival held in September. It won the Grand Prize for Feature Animation and enthusiastic support from the audience in the Canadian capital.

“I had been working hard, driven only by a fantasy that I would receive praise after its completion, but I still can’t believe that I was surrounded by people asking for my autograph,” Iwaisawa said.

When Iwaisawa and Ohashi were asked if they would collaborate again, the director said, “I’d love to work with him again for a project with enough budget.”

Ohashi, referring to Iwaisawa’s tremendous efforts, said, “I don't think it will happen again under the same approach.”