Noel Gatsinda, a student from Burundi, acts as a Namahage in the Sugoroku district of Oga, Akita Prefecture. (Video by Anri Takahashi) 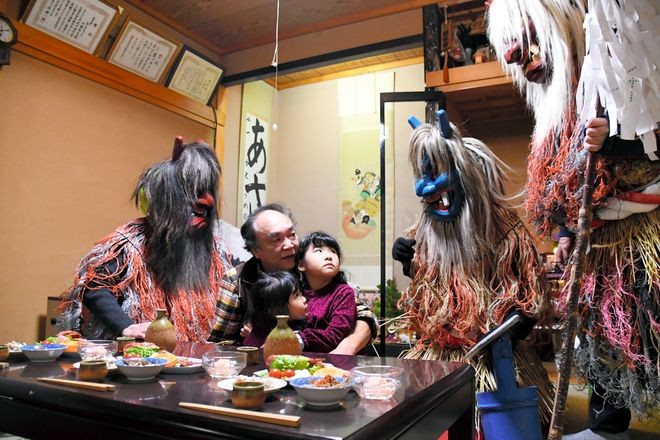 Children are horrified by the Namahage demons on Dec. 31 in the Sugoroku district of Oga, Akita Prefecture. (Anri Takahashi)

OGA, Akita Prefecture--Namahage demons rattled sliding doors and roared as they barged into houses here on New Year’s Eve, but something seemed a bit off.

As usual in the annual ritual, children bawled in fear and clung to their parents.

However, some of demons shouted in accents unheard of in the local dialect.

When the demons were finally unmasked, the reason was clear: People from outside the area, including a student from Africa, were involved in the ritual.

The Namahage event, which is said to bring good fortune and prevent laziness, dates back to the Edo Period (1603-1867) and was included in UNESCO’s Intangible Cultural Heritage list in 2018 along with other rituals featuring visits by masked and costumed deities.

But now, in Oga’s Sugoroku district in the southern part of the Oga Peninsula, the population is aging, and organizers of the ritual fear there may soon be no one left to carry on the tradition.

Despite some local opposition, Mikio Miura, 70, head of the group to preserve the Namahage festival in Sugoroku, began accepting “outsiders” to perform in the event more than 10 years ago.

Seven people wearing red and blue masks acted as Namahage in rotation on Dec. 31. Five of the actors, ranging in age from 23 to 48, came from areas outside Sugoroku, including Chiba and Fukuoka prefectures and elsewhere in Akita Prefecture.

Noel Gatsinda, a 23-year-old freshman at Akita International University in Akita city, arrived in Japan from Burundi in East Africa in September. He said he was asked by a teacher and friend to participate in the rite.

Gatsinda said he had only two hours to memorize his lines for the event.

“Everyone was terrified or pleased, so I am happy as well,” he said after his performance.

The word “namomi” refers to a burn caused by prolonged exposure to an “irori” sunken hearth in the local dialect. It is considered a symbol of laziness.

The demons are said to have been named after “namomi hagi” (namomi removal).

Miura said he expects the Namahage rite to bring more people to Sugoroku.

Kyosuke Shinoda, 24, who hails from Sugoroku and now works in Akita city, said he returns to his hometown every year with friends for the year-end holiday ritual.

In the latest event, three of his friends from outside the area acted as Namahage.

“If more people are inspired through word of mouth to be Namahage, that will help revitalize the community,” Shinoda said. “I hope the effort will finally lead to the preservation of the tradition.”

Some residents have opposed the move, insisting that allowing outsiders to perform as Namahage “mars the sanctity” of the ritual.

However, Miura notes that the essence of the rite may lie in interactions with “another world.”

There are various theories on how the tradition began.

Miura said one theory posits that the ritual started after locals, unfamiliar with non-Japanese people, saw foreigners stranded on a beach in Oga and mistook them for demons.

“People whom local residents do not know are more suitable for the ritual,” Miura said. “They storm homes with shouts in foreign and other accents that can make Namahage in Sugoroku so terrifying and impressive.”