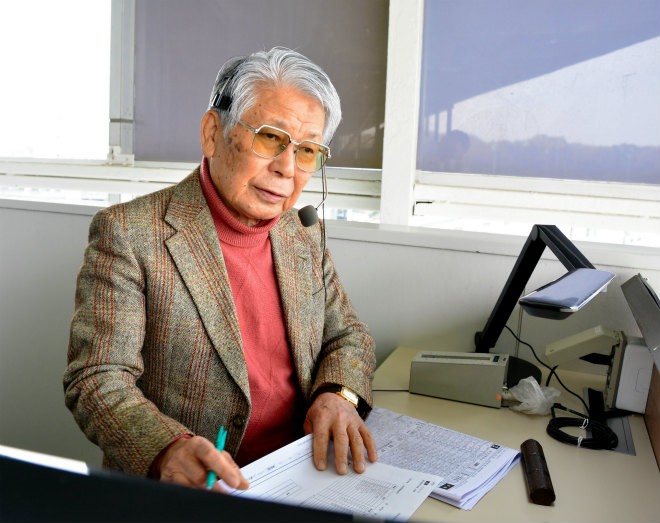 AMAGASAKI, Hyogo Prefecture--For 65 years, horse racing fans at the Sonoda and Himeji Racecourses have been mesmerized by the stirring call of track announcer Katsuhiko Yoshida.

He has been recognized by Guinness World Records in 2014 as having the longest career as an announcer at the same racetrack.

He is beloved by fans for calling a race in his unique "Yoshida style" as if rooting on the horses.

In the middle of December, Yoshida called a race from the announcer's booth at the upper part of the stadium.

“All the horses are lined up in the gate for the second race," Yoshida called out over the track's public address system. "The race has just started.”

His enthusiastic voice spread over the stadium and across the nation via TV and the internet.

On this day, Yoshida called only one race. He used to announce all the day's races, but he recently felt a loss of physical strength and on some days he does not announce at all.

On his off days, track patrons would ask security guards and ushers, “Will Yoshida announce today?” and “Post a notice at the entrance if Yoshida will call the days' races.”

Yoshida, who was born in Osaka, wanted to become a voice actor in radio dramas, which were very popular at that time. After he graduated from high school, he started to work part time doing live announcing at Sonoda Racecourse to earn tuition money for announcer's school.

He became absorbed in his job at the track.

“Every race has its own story,” he said. “I enjoyed announcing because I was excited about what would happen next.”

In those days, he would awaken every morning at 4 a.m. to help take care of horses at their stables, which gave him a hands-on education to horse racing.

His announcing style is his own.

“My announcing style is just calling the race and giving encouragement to the horses,” he said.

When he was a kid, his father used to take him to see traditional Japanese plays that touched on human emotions, in which audience members would often call out.

His father had a stutter and had difficulty in speaking unless he used his stomach muscles. So, he had a deep voice emanating from his stomach, which was distinctive when he called out at the theater.

Even today, Yoshida imitates his father’s manner of speaking.

Yoshida still remembers one of the most memorable races that he called, at Sonoda Racecourse in 1986.

Victory Tozai, the favorite, which had won a number of major races, was running out in front. But another horse made up ground, in close pursuit. Tens of thousands of spectators screamed.

However, Yoshida thought that Victory Tozai looked to be smiling. In the live call of the race, he said, “Victory Tozai is in a relaxed mode, as if saying, ‘If you want to catch me, try harder.’ It is pulling away on the home stretch.’  ”

Victory Tozai won the race, turning the yells of the crowd into huge cheers.

Over his long career, Yoshida said that he called only a handful of races that he was proud of.

He would often think, “Today, I had another bad day of announcing again. I will try harder to make it better tomorrow.” Half a century has since passed.

But nowadays Yoshida's health is not perfect.

"I can’t raise my level of excitement (in my voice) enough for the live call,” he said. “That is impolite to my customers.”

So, he decided to retire from the booth.

On Jan. 9, after he finished his live call for the races, Yoshida attended his retirement ceremony.