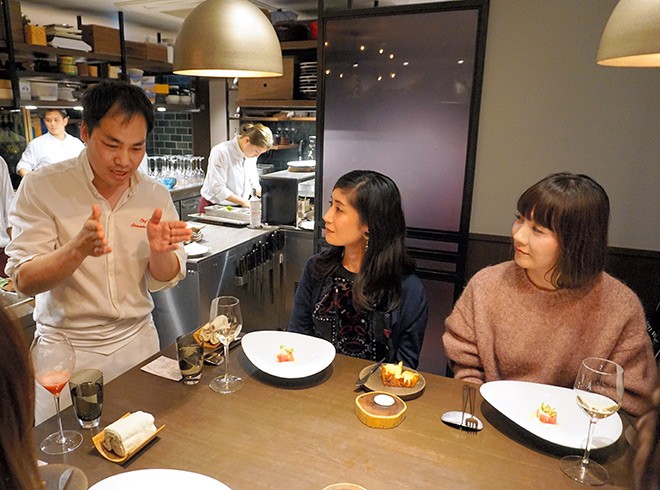 Shinsuke Ishii, chef at Sincere restaurant in Tokyo’s Shibuya Ward, tells diners about the sustainability of the tuna he serves. (Yuka Kanemoto)

When chef Shinsuke Ishii came out of the kitchen to talk to a table of diners, he didn't ask if the tuna with celery roots satisfied their taste buds.

Instead, the chef of the one-Michelin-starred restaurant Sincere in Tokyo's Shibuya Ward told them, “The number of Pacific bluefin tuna has been revived,” thanks to fishery regulations.

Top chefs in Japan such as Ishii have teamed to raise the awareness of sustainability in the seafood industry, using ingredients that are certified as “sustainable seafood” and educating customers.

Ishii, 43, has often offered such explanations to diners who come to his restaurant for the first time.

He said he has stocked Pacific bluefin tuna caught by fishermen who are highly aware of the importance of protecting fishery resources.

“In order to keep eating such delicious fish, I want the diners to feel the need to select properly managed ingredients,” Ishii said.

Ishii and his chef friends launched a group called Chefs for the Blue to promote ways to use fishery resources without overfishing and depleting them.

There is simply not enough domestic seafood, both in volume and types, certified as sustainable by international organizations to meet the demands of cooks and sushi chefs in Japan.

Group members have worked to establish an independent route for chefs to purchase seafood from producers that practice sustainable fishing methods without needing certification.

Prominent chefs have kept up with the trends and worked to raise awareness.

The Japanese branch of Relais & Chateaux, an international organization of luxury hotels and gourmet restaurants, issued guidelines to protect the marine environment and fishery resources in October 2019 in Osaka.

The organization’s headquarters in Paris in 2014 announced its commitment to protect fishery resources. Since then, it has urged restaurants to remove bluefin tuna and egg-bearing sea bass from their menus.

The Japanese branch, consisting of about 20 hotels and restaurants, had not sided with the headquarters’ recommendation, citing the diverse food culture in Japan.

But reality finally hit them, forcing a change in the course of action.

“Among 50 kinds of fishery resources in the sea area surrounding Japan, almost half are facing a critical situation,” said a staff member of the branch.

Hiroshi Yamaguchi, 59, the vice chairman of the branch who also serves as the general manager and executive chef at the posh Kobe Kitano Hotel in the capital of Hyogo Prefecture, admitted, “We had postponed the discussion on sustainability.”

Yamaguchi said he hopes to offer positive explanations to fishery operators, for example, “Catching only the quantity needed by pole-and-line fishing and 'ikejime' (humanely killing fish to preserve the quality of the meat) will help raise the commodity value as well.”

EDITORIAL: Why ‘big-boned’ policy measure has come to lose its meaning

Matsutake latest to join the list of disappearing delicacies

Tokyo shopkeepers brace for another slowdown as coronavirus flares