‘Complicity’ sheds light on dark side of intern program 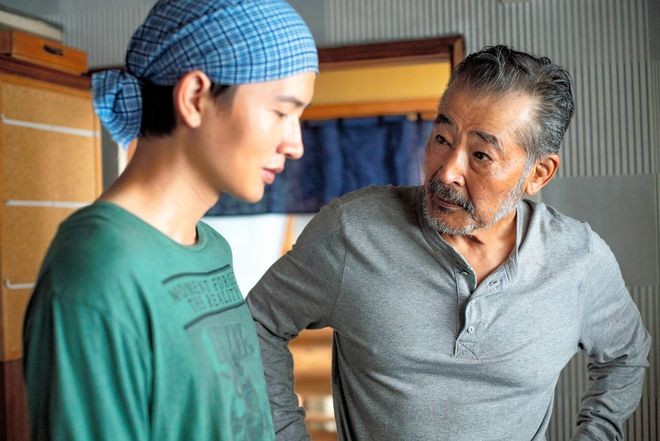 Director Kei Chikaura came up with the subject matter for his first feature-length film after learning that thousands of foreign technical interns go into hiding every year in Japan to escape exploitative working conditions.

Inspired by a real-life incident, “Complicity” tells the story about the relationship between a young Chinese man and an elderly “soba” noodle master.

The Chinese man, played by Lu Yulai, comes to Japan as a technical intern, but he flees unsavory working conditions and overstays his visa.

He finds a job at a traditional soba restaurant in a rural town. The owner, portrayed by Tatsuya Fuji, teaches his new worker how to prepare traditional buckwheat noodles and treats him as a son without prying into his past.

Chikaura in 2014 read a news report about Vietnamese technical trainees who stole and ate pet goats after they disappeared from their workplace in Gifu Prefecture.

He became interested in the topic and learned that several thousand foreign interns are reported missing every year in Japan.

“It’s a shameful problem for Japan,” the filmmaker said. “When I interviewed interns, I was shocked by the gap between what I had expected from Japan and the reality. I started work on making a movie to overcome the problem.”

Chikaura wrote the screenplay and raised production funds on his own.

His ambitious work received the Audience Award at the Tokyo Filmex festival in 2018. It was also screened at the Berlin International Film Festival last year.

Chikaura, who started his movie-making career with short films in 2013, aspires to establish a practical business framework for art films.

The director took an unusual approach and founded a website design company as an economic base for filmmaking, with an eye on bringing management know-how to the indie film industry.

“In Japan, films are split into two groups: art-house small-budget projects and commercial big-budget films. I want to aim for the in-between, the middle between the two,” Chikaura said.
He said his goal is to be like Comme des Garcons designer Rei Kawakubo.

“Her work is extremely creative, and yet she also sells pop clothes to operate a successful business,” Chikaura said. “I want to make that happen in the film industry.”

“Complicity” was theatrically released on Jan. 17 in Japan.