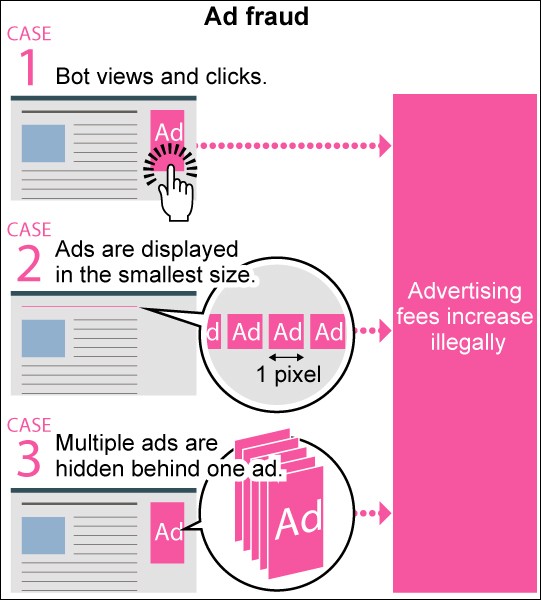 A Tokyo-based company thought its advertising campaign was paying dividends when thousands of users downloaded one of its gaming apps.

But it sensed that something was amiss when it found that none of the downloaders was actually using the app.

The company was an apparent victim of “ad fraud,” a growing scourge on the internet in which companies pay advertising fees for fake clicks, views and dubious downloads.

An estimated 10 percent of all internet adverting fees are paid through some form of ad fraud. And so far, there have been no known criminal cases brought up against the scammers.

The gaming app development and management company in Tokyo suspected it was victim of ad fraud one and half years ago by analyzing activity on websites and other online services featuring the company’s banner advertisement.

If users clicked the banner, they would be taken to another page where they could install the company’s gaming app.

Under the deal, the company paid about 1,000 yen ($9.20) to the online operators via an advertising agency for each of those downloads.

However, the company noticed that it took an unnaturally short amount of time--just a few seconds--to complete the download after the banner was clicked.

It also found that the app was not being opened after it was downloaded.

The company suspected that “bots,” or applications that operate repeatedly and automatically on behalf of humans, had been deployed to download the app, thereby artificially inflating the human user numbers as well as the company’s fee payments.

“We have advertised based on the data, such as the installation rate, but our calculations were wrong,” a company official said.

To investigate the matter further, the company used the “Phybbit” software, which provides measures against ad fraud.

For six months since April last year, the company said, the app was downloaded about 20,000 times possibly through bots or other suspicious means. The overall financial damage to the company is estimated at 11.5 million yen.

“I am surprised because the damage was larger than I expected,” the company official said. “It’s scary knowing that I might have continued to advertise without knowing anything.”

Multiple ad fraud methods, including “hidden advertisements,” were found on Mangamura (Manga village), a pirate website that shared popular manga titles without the approval of the copyright holders.

Under the hidden advertisement method, multiple ads can be hidden behind one. If users click the ad on top, the hidden ads also receive a click without being shown, thereby fraudulently increasing their view counts.

Mangamura’s operator was charged with copyright infringement and was prosecuted on suspicion of concealing profits in a bank account abroad in violation of the anti-organized crime law.

Although the internet advertising profit from Mangamura was seen as illegal, a criminal case against the ad fraud itself has not been built.

According to Phybbit CEO Satoko Ohtsuki, no ad fraud cases have been brought to court.

Phybbit analyzed about 15 million installations conducted online between January and June last year, and suspected that 19 percent of the downloads were done via ad fraud operators.

If the advertising fee costs 500 yen per download, the damage total would be 1.42 billion yen for the six months.

According to a report published in 2016 by the World Federation of Advertisers (WFA), the global financial damage from ad fraud could reach $50 billion (5.5 trillion yen) annually by 2025.

With internet adverting expenses worldwide expected to be between $400 billion and $500 billion that year, the ad fraud damage would account for about 10 percent of the total.

“Ad fraud is getting sophisticated, and many companies are wasting their advertising fees,” Ohtsuki said. “Taking protective measures will make cyberspace much healthier.”