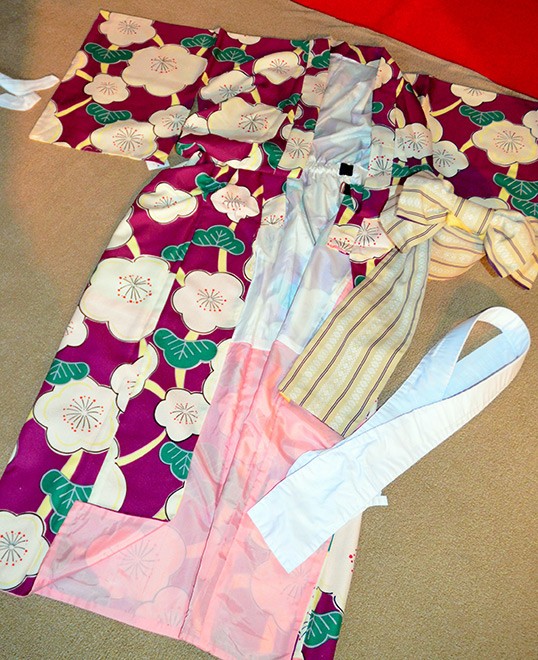 The garment can be worn by putting on three items: the kimono with hooks attached, a sash and collar. (Yusuke Shibuya)

Five minutes. That's all it takes to don a kimono jointly designed by two entrepreneurs in the hope of making the traditional garment suitable for casual wear.

Nagasaki Haikarasan, a kimono rental firm in Nagasaki, and Shinriki Hosei, a sewing company in Fukuoka, leveraged their experience to develop the quick-to-put-on kimono.

The main selling point is the ease with which it can be worn like causal clothing.

In contrast to conventional kimono, which takes considerable expertise to wear correctly, the new style requires just three steps: Fixing a detachable collar around the neck; wearing the kimono itself and attaching it at the waist with hooks; and adding an already-tied obi sash.

The kimono doesn't require a "juban" slip. Even if it is worn over casual clothes, such as a T-shirt, no one will notice.

"I want to wear this one every day," a 29-year-old worker at a cafe said after trying on the new kimono at an event held in Fukuoka in December.

She said she just remembers having a hard time wearing standard kimono.

"I spent hours from early in the morning wearing a kimono at Coming-of-Age and university graduation ceremonies. It was cold," she said.

Emiko Ano, 69, the representative of Nagasaki Haikarasan, worked at an apparel company until the age of 50. She grew weary of having to meet sales targets and chucked in her job as shop manager.

After retiring early, she packed a kimono for a trip to Europe. Wearing the garment kept her back naturally straight, and locals went out of their way to speak with her.

Ano started thinking about making kimono that can be worn without assistance, such as when a person is on a trip. After seven years of trial and error, she created a prototype that allowed the user to skip the time-consuming steps that deter many people from wearing the garment unless it is a special occasion.

Ano started a kimono rental business in Nagasaki's Dejima district in 2012. Her shop's reputation began to spread with as many as 250 customers dropping in on a busy day.

Because Ano sewed each garment by hand, she was unable to produce kimono in bulk for sale.

She met Eijiro Shinriki, 35, at a seminar for small and midsize firms held in Fukuoka in 2014. At the time, he had just taken over the sewing company.

Prior to that, Shinriki worked as a semiconductor engineer after graduating from university. He decided on a career change because he wanted to make something more connected with people's everyday lives.

Shinriki started out mainly making clothes and bags. After he met Ano and found he empathized with her ideas, he decided to try his hand at making kimono. He wanted to revive popularity in a garment that is renowned for being difficult to get "just right."

He researched the issue during downtime at work in the hope of coming up with something that is easy to wear, yet elegant. In June 2019, he applied for a patent for the product, which he made improvements to.

One of the issues was enabling users to wear kimono without having to reach around to their back to tie obi. He solved the problem by incorporating his own ideas and sewing techniques.

"This kimono can be a candidate for daily wear, as it is no more troublesome than casual clothes to wear," Shinriki said.

The companies not only offer finished products, but also redesign conventional kimono and a sash into easy-to-wear ones, without cutting the material.

"People can enjoy wearing kimono in a more casual manner, including those they have a personal attachment to but have long kept in the closet," Ano said, referring to alterations that can be made.

The two entrepreneurs started selling the easy-to-wear kimono through their respective companies last year, and plan to establish a joint firm shortly.