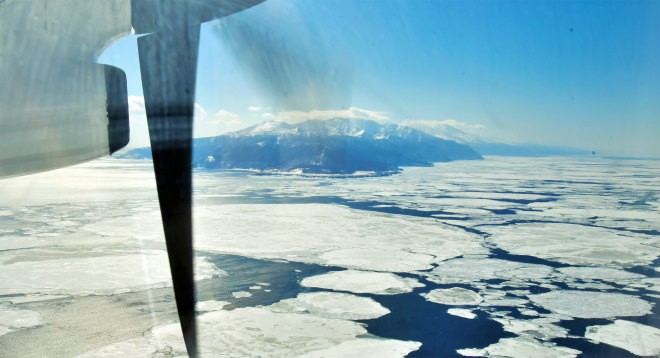 Drift ice is visible near Cape Shiretoko in Hokkaido in this photo taken in February 2019. (Asahi Shimbun file photo)

Reports have begun coming in from Hokkaido of sightings of this year's seasonal "ryuhyo" drift ice.

Ryuhyo's arrival was confirmed on Jan. 29 by the town of Shari on the Shiretoko Peninsula, one day after it was observed offshore from the city of Monbetsu on the Sea of Okhotsk.

This year's unseasonably mild winter has made news headlines around Japan, but that doesn't seem to have affected ryuhyo's usual southward drift through the Sea of Okhotsk.

Despite this, ryuhyo is said to have been dwindling rapidly over the last century.

"Eventually, we won't be able to see it in Hokkaido. It's an endangered species, so to speak," said Shuhei Takahashi, 71, director of the Okhotsk Sea Ice Museum of Hokkaido.

The force of ryuhyo is measured by the area of the sea it covers and the duration of its activity. According to data, the decline began around 1930.

Takahashi's research team has studied potential changes in the duration of ryuhyo's existence if temperatures keep rising at the present rate.

The probability of ryuhyo ceasing to arrive in the vicinity of Abashiri is estimated at 50 percent in the middle of this century, and 84 percent at the start of the next century.

Takahashi spent his boyhood in Abashiri where his father, a Japan Meteorological Agency official, was stationed. He recalled fondly how he used to ice skate at a ryuhyo-packed seaport and got scolded by his schoolteachers for playing dangerously.

At one time, ryuhyo was the bane of fishermen for blocking their ships' path. But its value was eventually understood as the basis of a food chain that nurtures massive colonies of phytoplanktons that sustain diverse species of fish and the animals that feed on them.

Fisheries and tourism are the twin pillars that support the regional economy.

Depending on its shape, ryuhyo is also called "ikada gori" (raft ice) and "hyokyu" (ice hill).

I learned that ryuhyo not only represents the local industry, but also the local culture that is deeply rooted in the lives of the people.

U.S. agrees to extradition of 2 nabbed in ex-Nissan boss’ escape