Lisa’s In and Around Tokyo: Owl’s Garden: Parliament of birds in session at owl ‘cafe’ 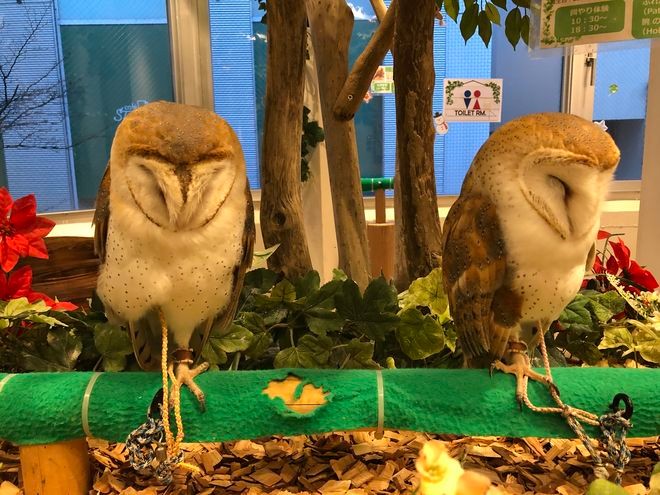 Owl’s Garden is a paradise for owl and bird lovers. A total of 20 owls, hawks and falcons welcome visitors who can interact with those birds of prey at close range. (Photo by Lisa Vogt)

A school of fish, herd of rabbits, streak of tigers, sounder of pigs, band of gorillas, tower of giraffes and ____ of owls.

What is the collective name of a group of owls? Hint: In the United States, the legislature is called Congress.
In the United Kingdom and Australia, it’s ____. The word starts with the letter “p.”

Do I hear “Parliament”? Clap-clap-clap! Yes, it’s a parliament of owls. It stems from “The Chronicles of Narnia,” the fantasy novel series written in the 1950s by the famous scholar and writer C.S. Lewis.
Owls are curious creatures. They have immobile binocular eyes, so they move their heads 270 degrees when looking around. They are insanely good hunters, and I’d hate to be their prey. Yet, no, that’s not the right word. It turns out, yes, this is better: We are the ones preying upon them.
A minute away from one of Tokyo’s most Instagrammable spots, the kaleidoscopic mirror escalator hall at the entrance of Tokyu Plaza Omotesando Harajuku, there is an owl cafe. It’s not really a cafe because there are no tables with chairs and a menu from which you place an order. To put it more accurately, it’s a gallery with live owls on display.
I had--and still do have--mixed feelings about such venues. I’m not a fan of zoos and aquariums; places that keep our furry, finned, scaly and feathered friends in captivity.
Yet, animals not born in the wild know no other life. Filial imprinting in birds is irreversible, and seeing owls obediently perched on bars just passing the time as Homo sapiens ooh and aah and snap photographs is, well, not exactly joyful and exhilarating.
But then, really, how different are they from overworked and exhausted “salarymen” commuting two hours to and from work, day after day, in jam-packed trains? What does it mean to “live”?
Sorry, this is not a philosophy column.
At the cafe made to look like an English garden (according to their pamphlet), visitors can experience falconry, learn about owls and how to keep them as pets, buy feed like untreated dead chicks, quails and mice, and just lounge about with the seemingly docile creatures.
The parliament of various owls was fascinating--such piercing eyes and gorgeously fashionable feathers! One fella seemed to enjoy being petted, and when I stopped, he (she?) looked up at me and seemed to nudge me to continue. That was a pleasant surprise.

This article by Lisa Vogt, a Washington-born and Tokyo-based photographer, originally appeared in the Feb. 2 issue of Asahi Weekly. It is part of the series "Lisa’s In and Around Tokyo," which depicts the capital and its surroundings through the perspective of the author, a professor at Meiji University.