North Korea says it has intensified efforts to block virus 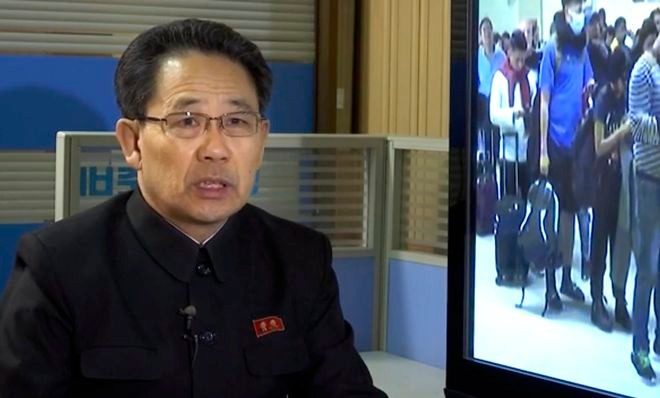 North Korea is intensifying efforts to prevent the spread of a new virus from China into the isolated country by blocking tourists, reducing flights and mobilizing more screening efforts, a health official said Thursday.

Kim Dong Gun, a director from the North’s Health Ministry, told Associated Press Television News the North has taken “strong preventative measures so as not to allow this virus come into our homeland.”

Kim said the country’s anti-epidemic headquarters has strengthened inspections at borders, harbors and airports, while health workers are “exerting all their efforts to find out, segregate and cure any patients and any suspected patients.”

Local governments under the guidance of the central public health committee "are devoting all their energies to block the spread of the novel coronavirus,” Kim said.

North Korea has yet to report any illnesses from the new type of coronavirus that was first detected last month in neighboring China. It has sickened thousands, most of them China, but South Korea has reported six cases.

Pedestrians and children walking on Pyongyang's streets were wearing face masks. Doctors at the capital's No. 3 Hospital discussed news about the outbreak in China and other countries.

Also on Thursday, South Korea said the Koreas have agreed to suspend operations of their liaison office in the North Korean border town of Kaesong until the outbreak is controlled. Dozens of South Korean officials returned home Thursday evening.

The North’s official Korean Central News Agency said emergency anti-epidemic headquarters have been established in Pyongyang and elsewhere and said the North will maintain an emergency alert status until the risk of infections disappear. The official Rodong Sinmun newspaper recently called the fight against the virus a matter of "national existence."

North Korea’s state media has been increasing its coverage of the outbreak as it grew in number and beyond the epicenter. Before the Lunar New Year holiday, the North began telling foreign embassies and tour operators it had planned strengthened travel controls and quarantine measures.

All tourism to North Korea has virtually stopped, while travelers with essential reasons to enter the country can expect a month in quarantine. Flights from Pyongyang to Beijing and Vladivostok have been reduced to a minimum.

North Korea took similar precautions during the Ebola outbreak in 2014-2015 and the 2003 spread of SARS. The North even suspended South Korean tours to Diamond Mountain resort for two months in 2003, temporarily depriving itself of a valuable cash source, to guard itself against SARS.