Testing for coronavirus will expand as 2 cases had no symptoms 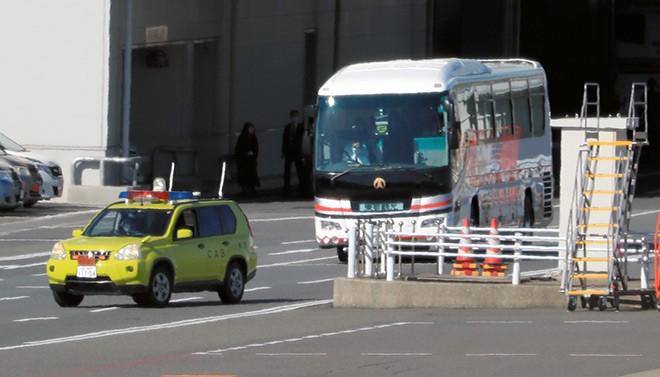 A bus carrying passengers who landed on a charter flight from Wuhan on Jan. 30 leaves Haneda Airport. (Hikaru Uchida)

Health ministry officials are expanding the scope of testing for the new coronavirus after being surprised by two positive tests from individuals who showed no obvious symptoms.

The two without symptoms were aboard the first government-chartered flight from Wuhan that landed at Tokyo’s Haneda Airport on Jan. 29.

But tests the following day showed they carried the coronavirus. It is unclear if the individuals are at a stage before symptoms actually appear or if symptoms will not surface. However, since they have the virus, they can transmit it to others if they are not quarantined.

Until now, the standards used to suspect an individual of having the coronavirus included obvious symptoms such as a fever of 37.5 degrees or higher and coughing. Individuals who visited Wuhan or came into contact with those who did and who later developed a fever or respiratory problems were also considered possible suspect cases.

A health ministry official said on Jan. 30 that the ministry never anticipated that individuals without symptoms would test positive for the coronavirus.

Shigeru Omi, president of the Japan Community Healthcare Organization, said, “We cannot deny the possibility of people in Japan becoming infected by those without obvious symptoms.”

Health ministry officials are revising who should be tested for the virus and are also considering including those who have come in contact with anyone who has been in Wuhan, regardless of whether that individual has symptoms stemming from the virus.

Yoshinobu Okuno, a professor of medicine who specializes in virology and heads the Osaka Institute of Public Health, said infections without apparent symptoms are also found in such illnesses as mumps, rubella and influenza.

Individuals without obvious symptoms could end up passing on those illnesses as well to others.

Reports out of China have said individuals without symptoms have been found to have the virus and likely transmitted the coronavirus to others.

Yasuhiro Setoguchi, a specially appointed professor of respiratory medicine at Tokyo Medical and Dental University, said there was a possibility of the coronavirus being transmitted to others through the mucus and stool from an infected individual without symptoms.

But he added that whether an individual becomes infected will depend on such conditions as the amount of virus and the health of the individual.

“Those with pre-existing illnesses should be especially careful because their immune systems are weaker,” Setoguchi said.

Meanwhile, a total of 26 passengers on the second chartered flight of 210 Japanese nationals that landed at Haneda on Jan. 30 have been hospitalized.

Thirteen initially complained of not feeling well and were taken immediately to hospitals, but another 13 who were tested after returning were advised by doctors to enter hospitals for further observation.

The health ministry also said on Jan. 30 that three additional coronavirus patients were confirmed, bringing the total in Japan with the virus to 14.

(This article was written by Naoyuki Himeno, Hajime Mikami and Shigeko Segawa, a senior staff writer.)