Doll made by disabled people in Okinawa sees surge in orders 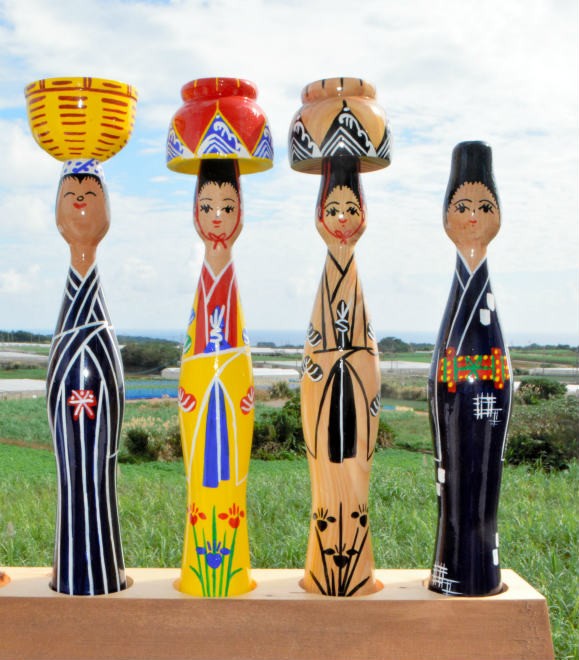 YAESE, Okinawa Prefecture--Born in the year of Okinawa's reversion to Japan in 1972, a locally handcrafted wooden doll with a cylindrical body is enjoying a rebirth after nearly being left for dead three years ago.

The Ryukyu Miyarabi Kokeshi became a famed souvenir when it went on display at the Okinawa Ocean Expo in 1975.

But a large stock of unsold dolls later piled up as fewer tourists visited Okinawa, forcing the Taiki Okinawa support facility for disabled people here, which makes the toy, to consider suspending production.

Although there were 10 or so craftsmen working there, the number dropped to two.

A turning point came three years ago when a department store in Naha started dealing in the locally made craftwork, leading to increased sales.

The doll drew much attention as "Chiisana Koi no Uta" (Little love song), a film based on a noted song of the same name of the Okinawan rock band Mongol800, opened in theaters in May last year.

In the movie, Ryukyu Miyarabi Kokeshi are featured as a gift available at a shop on a U.S. military base that is sent by U.S. personnel in Okinawa and their families to someone with written messages when they leave the southern island.

Before that, annual sales had not topped 400 units but the support center now receives more orders than its production ceiling of 500, according to facility representatives.

"Boosting the production capacity further is difficult since the dolls are created one by one by hand, but their rarity may in part help increase their value," said Kiyoshi Nakamoto, director of the support facility for disabled people.

Measuring 30 centimeters tall and 5 cm across, the Ryukyu Miyarabi Kokeshi sculpture is made of locally produced pine wood. It is marked by its thin body on which hair and eyes, along with a colorful kimono design, are delicately painted with a brush.

According to Nakamoto, an executive of the predecessor of the assistance center, which provided vocational aid for individuals with physical disabilities, proposed creating "a new industry that does not exist in Okinawa" when it opened in 1972. Craftsmen from the northeastern Tohoku region were invited to share their skills with residents of the facility.

The doll comes in four types: two clad in different costumes for Okinawa's traditional dance; one based on a girl with a basket on her head to sell fish; and a toy wearing a traditional fabric. They are sold at airports and souvenir shops as well.

Toshimitsu Onaga, 63, who has painted Ryukyu Miyarabi Kokeshi for 43 years, became unable to move his right arm and leg smoothly after suffering from a high fever during his childhood.

Fearing that he might be bullied because of his disability, Onaga did not attend elementary school and entered the center when he was 15. He began painting the dolls around the time he turned 20.

Onaga uses a brush with bristles measuring less than 1 millimeter wide to paint the face and kimono pattern on a cylindrical wooden piece. He said his "left hand remembers" how to do that.

"Dolls that I paint are currently quickly being delivered," said Onaga. "I have never been so busy. I feel the job is rewarding now that many people buy our products."