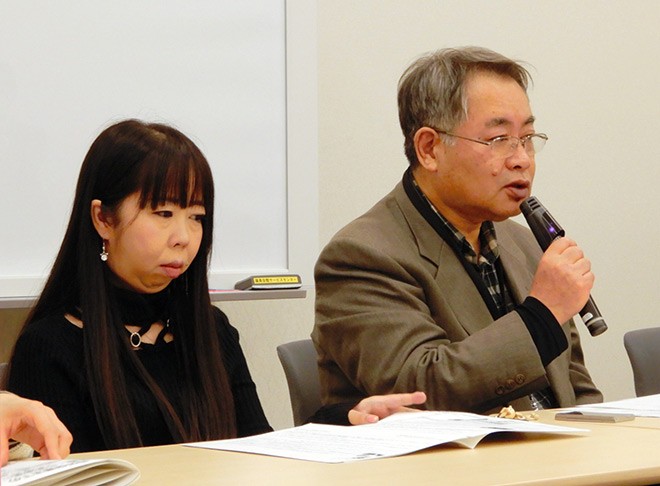 Two people who were forcibly sterilized even after the notorious Eugenic Protection Law was abolished say the government violated their human rights by failing to properly inform the public about the change in legislation.

Tsukasa Katagata, a 69-year-old resident of Iwate Prefecture, and Keiko Yoneda, 42, who lives in Tokyo, filed a petition with the Japan Federation of Bar Associations (Nichibenren) on Jan. 30.

The Human Rights Protection Committee of the federation is expected to review the petition and carry out an investigation. If it finds human rights were violated, it will take action against supervisory authorities by issuing warnings and recommendations, among other measures.

But such action is not legally binding.

Katagata and Yoneda have yet to decide if they will sue the government for compensation because they have not obtained their medical records, Motoya Ogasawara, a lawyer representing the two, said at a news conference in Tokyo.

Forced sterilizations were permitted under the Eugenic Protection Law that took effect in 1948 to prevent births of “inferior” offspring.

The law was revised in 1996 and renamed the Maternal Health Law.

Ogasawara said it is rare for victims who were forcibly sterilized under the Maternal Health Law to step forward. He said the two cases show that dubious medical practices and misinformation continued even after the old law was abolished.

According to the written petition and other sources, Katagata stopped attending high school mainly because he was being bullied. He then developed schizophrenia.

Although he entered a university, he dropped out and constantly received treatment at a hospital.

In 1998, his housemate became pregnant, but she had a miscarriage.

Katagata said he was then told by a relative, “You’re handicapped, so don’t you dare have children.”

The relative recommended that Katagata undergo a sterilization operation.

After Katagata and the woman broke up, his schizophrenia symptoms worsened, and he was admitted to a hospital again in 2002.

Katagata said the relative demanded that he have a vasectomy as a condition for his release from the hospital.

“There’s this thing called the Eugenic Protection Law,” the relative told him. “If you don’t undergo an operation for sterilization, I will make you stay at the hospital for the rest of your life.”

In 2003, Katagata was forced to put his personal seal on a consent form for the vasectomy and underwent the 30-minute operation.

After the operation, Katagata learned that forced sterilization based on the Eugenic Protection Law had been abolished seven years earlier.

“To have a job, get married and start a family,” Katagata said about his goals in life at the news conference. “Being disabled, I just wanted to pursue ordinary happiness.”

Yoneda underwent a tubal ligation operation without her consent in January 2015, when she gave birth to her seventh child by cesarean section.

Her doctor said Yoneda’s life was in danger and obtained consent from her sister to perform the surgery.

The sister apologized to Yoneda after she recovered from the anesthetic but was still in a daze.

However, the doctor didn’t say anything to Yoneda about her tubes being tied, she recalled.

“I was infuriated, thinking, ‘How could they do it without my permission?’ I was in shock,” she said.

By filing the petition, Yoneda said: “I hope nobody else has to deal with what I had to go through. That’s all.”

Two women in Miyagi Prefecture who were forcibly sterilized as teenagers filed a lawsuit against the government, seeking punitive damages and an apology.

The plaintiffs, one in her 60s and the other in her 70s, argued that the operations robbed them of their freedom to have children and their right to pursue happiness.

In May 2019, the Sendai District Court ruled that the forced sterilization practice was unconstitutional, but it denied compensation to the women.

Still, the ruling has encouraged other victims to come forward.

Katagata and Yoneda said one reason they filed the petition with the Japan Federation of Bar Associations was to inform the public about their experiences.

“I hope the federation investigates hospitals,” Ogasawara said. “We will start spreading information first to save other victims.”

The health ministry’s Maternal and Child Health Division declined to comment on the cases.