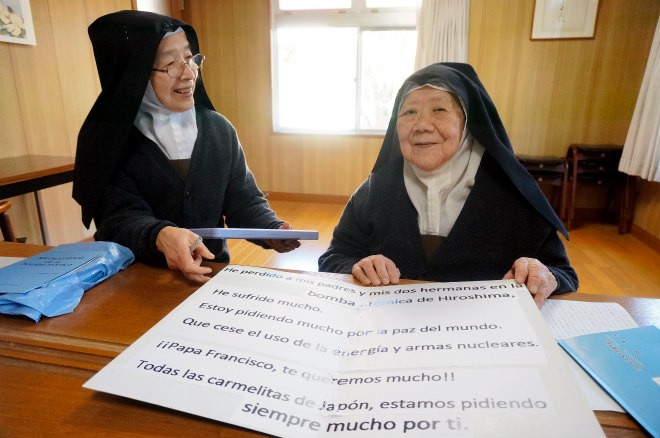 Yasuko Cho, right, recalls her encounter with Pope Francis on a communication board shown to the pope in the foreground, with Yasuko Takazono in attendance, on Dec. 16 in Yamaguchi. (Sonoko Miyazaki)

YAMAGUCHI--For much of her life, Yasuko Cho tried to rid herself of the memories of surviving the atomic bombing of Hiroshima as a teenager, losing her parents and two of her siblings in the blast.

But she believes the bitter experience helped her to find God. She later wrote about her life in a book, which she gave a copy to Pope Francis when he visited Hiroshima in November, the first visit to the city by a pope in 38 years.

Cho was asked by the bishop of the Catholic Hiroshima Diocese to join a peace gathering at Hiroshima Peace Memorial Park as one of the representatives of atomic bomb survivors for the pope's visit.

After exchanging greetings with representatives from Buddhism, Shinto and other religious communities, Francis slowly came closer to the hibakusha.

Cho, holding a board stating in Spanish that “we pray for a peaceful world with no nuclear weapons,” handed the Spanish version of her book to the pope. Accepting the publication, Francis gently stroked her head.

Speaking to those in attendance at the park, Francis declared the possession of nuclear weapons as “immoral.”

Cho, 89, is a member of the Discalced Carmelite Sisters of Yamaguchi’s nunnery here.

The Carmelites are known to have a particularly rigorous discipline compared with other Catholic groups, and Cho devotes herself to prayer and her work with limited interactions with society.

Every morning, Cho rises at 5 a.m. and prays until breakfast. Residents of the convent cook their meals from crops they grow by themselves and also help each other with daily chores.

“I pick up dead leaves,” said Cho. “I add them to the compost to make fertilizer. And I also sew uniforms for others.”

She spoke across a table in an interview room at the church. While bars are set up to separate a prohibited area from the outside world, they were open during the interview.

As Cho is hard of hearing, sister Yasuko Takazono, 74, was also in attendance with a communication board to help her communicate in writing.

“I went to Hiroshima only to lose my family,” said Cho, opening the conversation.

Cho and her parents, an older brother, an elder sister and two younger sisters initially lived in Tokyo. They moved to Hiroshima when her father was transferred by his company to work when Cho was in elementary school.

When the tragedy befell Hiroshima, Cho was 14, a third-year student at what is the current Hiroshima Municipal Funairi High School.

Cho slept until 8 a.m. at her home in the present-day Takasu district of Hiroshima’s Nishi Ward, because she had an off day while working at a plant under the student mobilization system at the time.

While washing her face after waking up, a strong flash of light suddenly poured into her home.

As her residence, which was just 3.5 kilometers from the blast center, was totally destroyed, Cho headed for a nearby air raid shelter.

Cho later found her mother, Fumiko, who was severely stricken by radiation from the nuclear attack, at an acquaintance’s home. Saeko, the youngest sister, who was an elementary school first-grader, returned home as well.

But her father, Naotsura, who went out to have a radio repaired, her elder sister, Ikuko, who worked at the home affairs ministry, and another younger sister, Tomoko, who was in the first grade at the same school as Cho, never showed up.

The next night, her mother died after telling Cho to “give my regards to your father” while continuing to utter words of concern for the rest of her family.

Her youngest sister was adopted by another family and Cho started living with an uncle in Yokohama. When Cho was invited by a friend to attend Mass at a church, she was so inspired that she was baptized at the age of 20.

“Getting up early and going to Mass brought me great peace of mind,” Cho recalled. “Losing my parents was a sad thing for me, but the event may have been a means for God to call to me.”

She also explained why she decided to become a Carmelite, although severe restrictions are imposed on the life of the nuns.

“Suddenly left in loneliness, I always felt a different kind of sorrow in my mind than others whose parents are alive,” said Cho.

Even now, Cho said she sometimes remembers her father taking her to visit a mountain and sea during her childhood whenever she spends time in the rich natural surroundings of Yamaguchi.

In August 2006, Cho published her experience of being victimized by the atomic bomb for the first time.

Although she tried to forget about the past, a cousin inspired Cho to share her story to convey the horrors of nuclear weapons, telling her, “It is your duty to write about your experience.”

In November, for the pope's visit, she, along with other sisters who were allowed to leave the nunnery, boarded a microbus for Hiroshima.

Looking back on her encounter with the pope, Cho said she felt “a strong sense of gratitude and joy.”

She returned to her silent life of prayer feeling delight in her mind.

“There is no other means than to directly pray to God (for nuclear abolition),” said Cho.