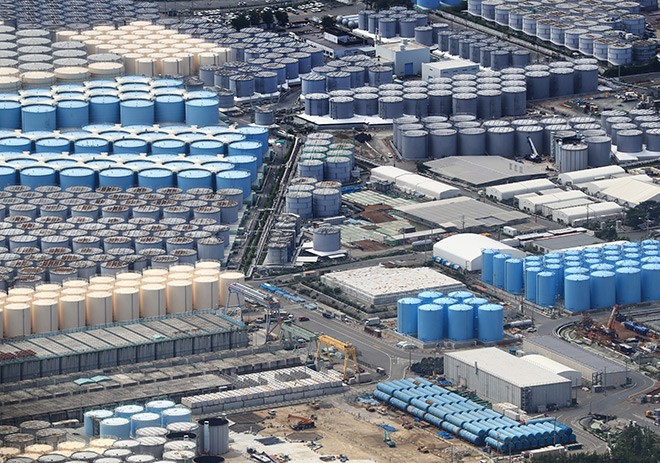 A government panel wound up three years of discussions Jan. 31 by effectively suggesting that releasing more than 1 million tons of water contaminated with radioactive substances at the Fukushima No. 1 nuclear power plant represented the most feasible option.

While a final decision on disposal of the water will be left to the government, the subcommittee under the Ministry of Economy, Trade and Industry said releasing diluted water in the ocean is a better option than discharging it into the atmosphere after boiling and further processing to remove radioactive substances as much as possible.

The issue is taking on heightened urgency in light of the fact that the storage capability at the crippled Fukushima No. 1 nuclear power plant is rapidly reaching its limit.

About 1.2 million tons of contaminated water are already in storage there, and Tokyo Electric Power Co., operator of the complex, only has plans to increase the tank capacity to about 1.37 million tons.

That capacity is expected to be reached in summer 2022 as water still has to be pumped into the nuclear reactors to cool the melted nuclear fuel produced by a triple meltdown triggered by the 2011 earthquake and tsunami disaster.

Other options looked at by the subcommittee included finding other locations to install storage tanks. But in the end, only two "realistic" options remain: dumping the water into the Pacific Ocean or releasing it into the atmosphere.

In the final recommendation released by the subcommittee, releasing the water into the ocean was considered to be more feasible from a technical standpoint, such as the ease in monitoring radioactive substances after a release.

All the contaminated water has been treated using equipment called advanced liquid processing systems, or ALPS, but the process does not remove tritium, a mildly radioactive isotope of hydrogen.

Water containing tritium has been released into the ocean at other nuclear plants both in Japan and overseas with the proviso that concentration levels are controlled.

Under the proposal considered by the subcommittee, the water would be treated a second time to dilute tritium levels to below current safety standards before releasing it into the ocean.

Although contaminated water is also stored at other plants, the situation at the Fukushima plant is quite different as the problem is a direct result of the triple meltdown and thus long considered a primary factor in the negative publicity that has affected farm and marine produce harvested in Fukushima Prefecture.

Fishermen in the prefecture vigorously oppose the release of even processed contaminated water following years of restrictions on catches and ensuing negative publicity to get to where they are today.

While fishing has been allowed for species found to have radiation levels under established standards, Fukushima fishermen still are only able to haul in about 20 percent of catches recorded before the 2011 nuclear accident.

The subcommittee conceded there was a possibility the release of processed water could lead to further negative publicity.

Addressing the possible social effects of the two options, the panel accepted that vaporized water in the atmosphere would greatly expand the geographic and industrial range of businesses possibly affected by negative publicity. However, the subcommittee stopped short of conducting a quantitative assessment of the possible negative publicity.

The recommendation said being able to monitor radioactive substances after the water was released was the main reason for leaning toward the ocean option.

Subcommittee chairman Ichiro Yamamoto, professor emeritus at Nagoya University who is well-versed in issues involving tritium, said the panel only included options in its recommendation that members felt would be doable.

(This article was compiled from reports by Yu Kotsubo, Naoya Kon and Masahito Iinuma.)