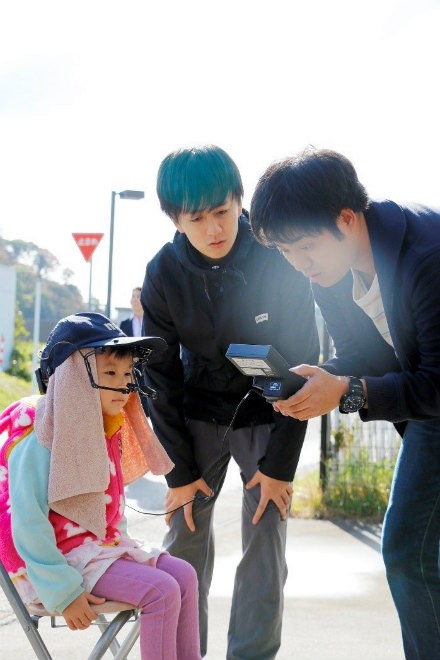 Researchers put eye-tracking gear on a kindergartner for a traffic safety experiment on the campus of Kanazawa University in Kanazawa in November 2019. (Provided by associate professor Makoto Fujiu)

KANAZAWA--Kindergartners fail to notice stop signs and have little understanding of such traffic commands painted on roads, making them vulnerable to accidents at intersections, a study showed.

“Traffic education for preschoolers should be revised,” said Makoto Fujiu, 37, an associate professor at Kanazawa University who led the team of researchers in conducting the behavioral observation study.

According to the Institute for Traffic Accident Research and Data Analysis in Tokyo, 7-year-olds have topped the list of pedestrians injured or killed in traffic accidents for 25 straight years between 1994 and 2018.

In 2018, 1,143 7-year-olds were involved in traffic accidents. That figure is roughly three times the number, around 300, for junior and senior high school students, and nearly double the number, around 500, for those in their 20s and 30s.

Sixty percent of accidents involving elementary school first-graders in 2015 occurred at intersections and their surrounding areas while the children were going to and from school.

To gauge traffic safety awareness among children before they enter first grade, Fujiu and the other researchers gained cooperation from a Kanazawa University-affiliated kindergarten to study how five kindergartners at the age of 6 would behave at an intersection on the university’s campus in Kanazawa last autumn.

The children wore eye-tracking gear and were asked to walk in their usual manner.

During the study, all of the children did not notice a stop sign placed at least 1 meter high at the intersection. When the sign was lowered to 50 centimeters, four of the pupils didn’t look at it.

They all also failed to stop before the word “tomare” (stop) painted on the road in hiragana.

Although the kindergartners could read the word, they didn’t know they were actually required to stop, according to Fujiu.

However, after the researchers taught the children the meaning of the signs and asked them to walk again, they all stopped before crossing the intersection.

In principle, such signs are intended for drivers.

But the associate professor did research on how the signs could be better used to secure the safety of pedestrians, particularly children.

He presented his findings at a conference for civil engineers held at the University of Toyama in December.

“Conventionally, traffic safety education has been irrelevant to the perspectives of children,” Fujiu said. “We learned that stop signs won’t enter the field of vision of children whose line of sight is low, and that they don’t recognize the meaning of ‘stop’ written on the road.

“I think it would be effective if we could put up stop signs using characters that attract their attention … at least on routes where they go to and from school.”

Masumi Ueda, principal of the kindergarten that cooperated in the experiment, agreed that more should be done to teach children about traffic safety.

“Preschoolers are mostly picked up and dropped off by their guardians or kindergarten buses, so they have fewer opportunities to actually walk around the town and learn (traffic rules) before they enter elementary schools,” she said.

“For children, ‘I know’ and ‘I can’ are also two different things,” she continued. “We should re-examine the way traffic safety education is provided.”

A representative of the National Federation of Workers and Consumers Kyosai Cooperatives (Kokumin Kyosai co-op), which supported the experiment as an academic-industrial joint study, said: “We would like to prepare teaching materials for young children to reduce traffic accidents involving 7-year-olds.”

Memorial to dead wartime B-29 crew in Tokyo consoles souls