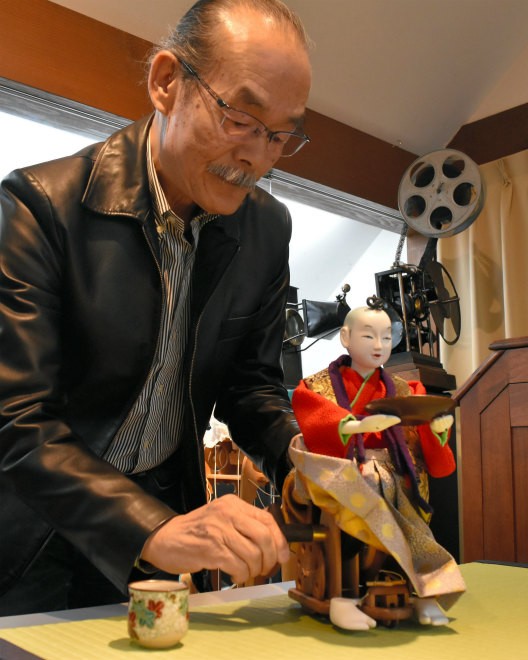 KOBE--Even a "karakuri" mechanical doll master was impressed when asked to restore a tea-serving automaton whose origin dates to the 1650s.

"It is said that the first tea-serving doll was created in the 1650s, making it one of the oldest dolls in the world that carried things," said the ninth-generation Tamaya Shobei, 65. "A single spring can move its face and feet, and it carries a tea cup. What's great about it is that it serves tea for a guest and comes back to the master."

The mechanical doll was added to the collection at the Rokko International Musical Box Museum in the Rokkosancho district of the city's Nada Ward.

It will be on demonstration at the museum for a special exhibition titled "Karakuri Puppets: Japan and the West" until March 1.

Tamaya, who runs a studio in Nagoya, restored the doll at the request of the museum.

The tea-serving automaton is a representative work of "zashiki karakuri" (automata for domestic use), which were created for daimyo feudal lords and wealthy merchants during the Edo Period (1603-1867).

The robot moves forward when a tea cup is placed on the saucer and stops when the cup is removed. When a cup is placed again, the automaton makes a U-turn to return to where it came from.

Its design diagram is contained in a handbook published in 1796, "Karakuri-zui," but there is not a single piece that has survived to this day.

Also on display at the exhibition is a restored "ecrivain," an automaton produced in France in or around 1900. It is a clown doll that dozes off while writing a letter, wakes up to relight the lamp and starts writing the letter again.

"We hope visitors can see the differences between Japan and the West, such as the appearances, materials and mechanisms," said museum curator Erina Sakimoto, 31.

The venue is closed on Thursdays. The demonstration is held seven times a day.

For more information, go to: (https://www.rokkosan.com/museum/event/cat_event/3387/).