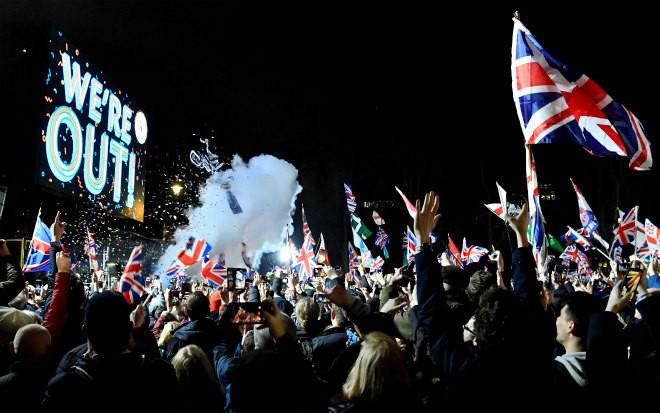 Brexit supporters celebrate Britain’s departure from EU in the square in front of Parliament in London on the night of Jan. 31. (Ryosuke Ishibashi)

After the end of World War II, Winston Churchill made a passionate call for Europe's unification.

In a speech he delivered at the University of Zurich in 1946, the British statesman called for the establishment of a "United States of Europe" to ensure that European countries would support each other and pursue freedom and prosperity together without starting a war in the region again.

"The structure of the United States of Europe will be such as to make the material strength of a single State less important," Churchill said in the speech, as quoted in "Churchill: The Power of Words," a collection of the political giant's writings and speeches compiled by Martin Gilbert. "Small nations will count as much as large ones and gain their honor by a contribution to the common cause," Churchill predicted.

The European Union was created out of a grand vision through many years of strenuous efforts.

Values that reflect a form of nationalism stressing Britain's power, the complete opposite of those that Churchill promoted, appear to have been the driving force behind Britain's exit from the EU on Jan. 31.

British Prime Minister Boris Johnson eulogized the country's withdrawal from the EU in his Brexit Day speech, saying, "This is the moment when the dawn breaks and the curtain goes up on a new act in our great national drama."

During the transition period until the end of the year, in which the relationship between Britain and the EU remains unchanged, the British leader can make all kinds of upbeat remarks about a Britain that is no longer part of the EU without worrying about the consequences of the move.

If the country fails to strike a new deal with the EU by the deadline, however, British citizens will start feeling the effects of being outside the bloc on their daily lives.

In today's Europe, memories of World War II are fading, while the vision of a unified bloc is losing its power and resonance.

A growing number of Europeans are coming to hold the view that the benefits of the region's prosperity are mostly monopolized by the wealthy, chosen few.

Mounting concerns about immigrants taking jobs away are marginalizing the ideas of international cooperation and human rights in the public mind.

Britain is not alone in struggling with the new realities in Europe.

While advocating the idea of a United States of Europe, Churchill said Great Britain should be "the friends and sponsors of the new Europe" rather than a part of it.

Will Britain play the role of supporting the EU's ideal from outside in the coming years? Or will it act as its destroyer?