Oldest kanji in Japan? Stone fragment may hold the key 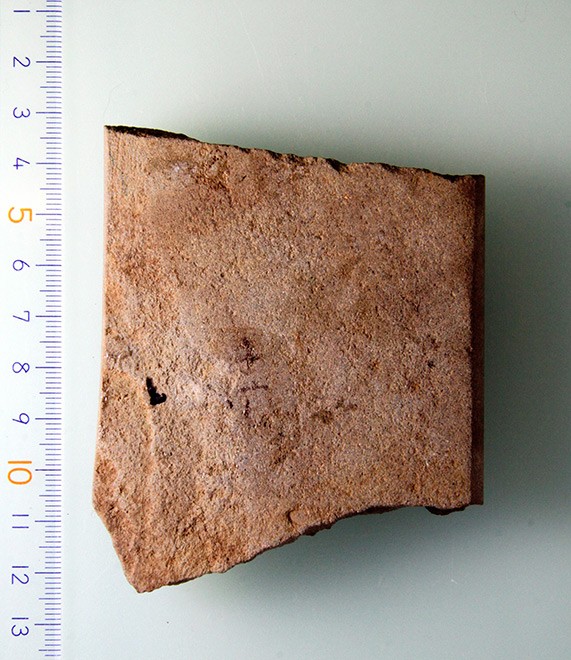 The stone artifact excavated at the Tawayama remains in Matsue, capital of Shimane Prefecture. Two dark lines on the left may be letters, archaeologists say. (Provided by Yasuo Yanagida)

A stone artifact dating to around 2,000 years ago that appears to have writing on it is causing a stir in the world of academia as the find could constitute the oldest example of written language in Japan.

The key to the mystery lies in whether there really are written characters, and if so, whether they were written in Japan.

But skeptics said the presence of writing in India ink could not be confirmed through infrared imaging, and called for further research.

The artifact is 9 centimeters long and originates from the latter part of the Yayoi Pottery Culture Period (1000 B.C.-A.D. 250)

Takeo Kusumi, a researcher with the Fukuoka city government’s Archaeological Property Section, said the artifact could be part of an inkstone. He maintained that kanji characters were discernible on the rough surface.

He presented his opinion at a conference of archaeologists held in Ogaki, Gifu Prefecture, on Feb. 1.

Kusumi is in no doubt the remnant is part of an inkstone created in Japan, citing marks left by the use of the inkstick.

In Japan, the oldest known letters confirmed to date were jotted down on clay vessels excavated in Fukuoka and Mie prefectures, dating to the second and third century.

The characters in the latest discovery are thought to have been written around the beginning of the first century, hence the buzz about the artifact found at the Tawayama remains.

The period in China falls between the latter part of the Earlier Han period and the early years of the Later Han period.

Yasuo Yanagida, a visiting professor of archaeology with Kokugakuin University, agrees with Kusumi that Chinese characters are present.

Yanagida and his colleagues noted that 200 or so inkstones from the Yayoi Pottery Culture Period and the following Kofun Period, which lasted from the late third century to the seventh century, have been unearthed around the nation. Most of them were discovered in western Japan.

If the stone fragment found at the Tawayama site is confirmed to be an inkstone, researchers said it could provide important clues as to when people living on the Japanese archipelago began using a written language and how writing spread.

But Junichi Takesue, a professor of archaeology at Fukuoka University, was skeptical that the dark lines may symbolize letters.

He referred to a study using infrared ray imaging by the Matsue municipal government’s buried cultural properties section that did not confirm the existence of characters written in India ink.

“There is the possibility that what were left on the stone remnant are letters, but we cannot reach a definitive conclusion at this stage yet,” he said.