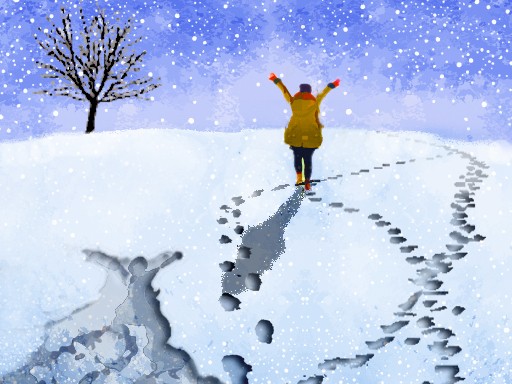 Looking up
Looking down--
Moon and I
--Anne-Marie McHarg (London)

pearl ring on the floor
between them
an icy moon
--Tanja Trcek (Golrik, Slovenia)

underneath the surface
the mystery of an ocean--
icy moon
--Julia Guzman (Cordoba, Argentina)

The haikuist warns “the more desolate the country becomes, the more frequently the bear comes out.” Roger Watson thought he was going home alone in Hull, U.K. Walking toward Cetinje in Montenegro, Tomislav Sjekloca wondered who he’d meet up ahead. Robin Rich found himself in Brighton, U.K.

footsteps
following me home
in the snow

my tracks to
me in the snow
turn the page

Tracking paw-prints, Vasile Moldovan wondered if a game warden was close on his heels. Anna Goluba’s footprints vanished from the sand.

Some poachers ...
light from the snow moon
divulges them

The Snow Moon
Empty shells
On the shore

Liz Gibbs recalled when her 100-year-old mother would walk beside her “hand in hand down our snowy sidewalk to the house from the car on the street leaving an imprint of our footprints together in the newly fallen snow.” Satoru Kanematsu counted bygone years.

one year later …
only my footprints
in the snow

Welcoming in the Year of the Rat, Djurdja V. Rozic asked rhetorically, “Should we shovel the snow, each in our own yard instead of expecting the universe to fix it for us?” Doc Sunday revealed his sign on the Chinese Zodiac. Henryk Czempiel considers himself one of a kind in Poland.

heavy snowfall--
a metal rat shoveling
rust from the path

millions of mice
New Year’s greetings
all over Japan

snowflakes
unlike billions
me

Fearing the spread of China’s coronavirus, Hidehito Yasui’s regular physician in Osaka was so busy he had to curtail appointments.

doc’s clinic
closed for over a week
flu raging

Erika Moriyasu’s haiku was commended as a mysterious, surreal poem in a contest held at Kagawa University. Her classmate in the 3rd year of medical studies, Keigo Nagano, was honorably mentioned by Susan Antolin for bringing back memories “of a year spent in Sapporo” who wondered “though, whether snow really does make much of a sound.” Anthony Q. Rabang heard his heart beating in Ilocos Norte, Philippines.

crescent
secret exit from dark sky
to another world

sound of snowing
but warm my heart
because I’m in Kotatsu!

walking her home
our breaths under
December moon

Thick-furred husky dogs burrow in the snow to keep warm at night in Winnipeg, Manitoba, where Debbie Strange reported, “It’s only minus 27 degrees with the wind-chill.” Kristen Lindquist might think cats are smarter than dogs in Camden, Maine.

deep snow
our dog must think
she’s a dolphin

snow moon
the cat in her basket
curled in a ball

moonlight ...
colors disappeared
under the snow

A fresh white background brought colors to life for Benedetta Cardone in Massa, Italy. Red might be the color of love according to Helga Stania in Ettiswil, Switzerland. Goran Gatalica was enticed by perfume in Croatia. In Catania, Italy, did Rosa Maria Di Salvatore see someone fall out of love?

a little snow--
I discover hidden faces
in the crowd

red riverside bench
love in the eyes
of the passer-by

Womanhood
the scent of seduction
before night ends

jasmine in flower
a girl in the moonlight
reading a poem

Nadejda Kostadinova cleansed her yard, and refreshed her spirit, in Sofia, Bulgaria. Snow piqued Sheila K. Barksdale’s appetite in Gotherington, England. Anne-Marie McHarg could hug the moon. Kanematsu wished he could have hugged a haikuist one last time.

first snow
covering everything
I don’t want to see

Twin moons--
Embracing each other
Over frozen lake

Corine Timmer sniffed at the hunger moon in Portugal.

snow moon ...
from somewhere the scent
of a sizzling fire

Watson contemplated a near-pristine sketch. Mario Massimo Zontini discovered purity. Horst Ludwig reveled in opera all down the highway. Adjei Agyei-Baah peered down a river valley in Kumasi, Ghana that stretched through the galaxy.

whiter is
the snow in the fields--
at daybreak

frozen river
what becomes
of the moon path?

In February 2014, Polish haikuist Ernest Wit rejoiced in the flow of a melting glacier. Poets today, however, worry thinning glaciers are raising ocean levels. Thai poet Vasu Sankamnerd remains confident that “the youth around the globe is not sitting idly. Inspired by Greta Thunberg, they are ready to save their homes.” Guliz Mutlu added a footnote. Marco Fraticelli prayed that Donald Trump’s optimism at the World Economic Forum in Davos rings true: “the dynamism of market economies were able to solve any problem.”

spring wind
touching the wet head
of a glacier

The end of the world!
No Way!
Youth heroes

The next issue of the Asahi Haikuist Network appears Feb. 21. Readers are invited to send haiku about cats in love on a postcard to David McMurray at the International University of Kagoshima, Sakanoue 8-34-1, Kagoshima, 891-0197, Japan, or e-mail to (mcmurray@fka.att.ne.jp).