Brian May: We have made a terrible mistake with our planet

Brian May, guitarist of British rock band Queen, in an exclusive interview with The Asahi Shimbun (Video by Toshiyuki Takeya and Kazuhiro Nagashima) 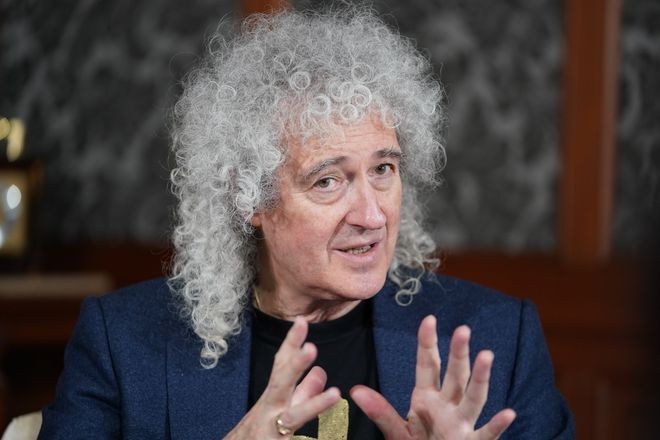 “Freddie is always with us,” Queen guitarist Brian May says in an exclusive interview with The Asahi Shimbun. (Hiroki Endo)

Brian May said that even if he had a time machine, he would not return to his glory days as guitarist of British rock band Queen, although he believes humankind needs to start again.

“I’m happy with the memories, but I’m very happy with this moment because it’s full of surprises,” May said in an exclusive interview with The Asahi Shimbun. “I feel so privileged that we got to this point, and so I’m happy to be at this point in time.”

May was visiting Japan for the “Queen + Adam Lambert” shows held from Jan. 25 through 27.

It has been 45 years since Queen first performed in Japan in 1975, and May said he was blown away by all the changes that have happened in the country.

“We come back and we see young faces in the audience like we did in 1975. But they are different. You know they were the moms and dads and grandparents, even. Now, it’s a new generation of children,” the musician said. “It’s a great privilege to have this experience.”

The Japanese edition of May’s “Queen in 3-D,” the first biography about the legendary band written by a member, was released on Jan. 24. It also describes the last days May spent with Freddie Mercury, the lead vocalist of the group.

“We created this whole scenario, which is Queen, this whole genre, this whole oeuvre, if you like, of Queen music. And it’s wonderful that people are now discovering it in even more detail than they did in the past,” May said. “So Freddie is always with us. He has to be, because he is a co-creator.

“But mostly I feel great joy that we had this experience and we had this wonderful spectrum of Queen music that we can still explore and communicate and share with a new audience.”

“I felt not only of the people and the situation but also I remembered my feelings when I was in those places (when the 3-D pictures were taken). So, it's a mixture of all these emotions ... great joy at some of the wonderful things that happened and great sadness when the times were hard,” he said.

“But the overall feeling was very good. It allows people to experience our journey with the ups and downs, and it’s been a very good journey,” he added.

The show kicked off on Jan. 25 at Saitama Super Arena in Saitama before moving to Osaka and Nagoya. It was the third time for the band to perform with Lambert in Japan.

“I suppose the highlight is just the sheer beauty and range and power of Adam’s singing and the expression that he brings. He brings new interpretations to the songs,” May said. “(The stage is) very dramatic, very picturesque as we always have been. But it takes (us) to a new place.”

Last year, May suggested holding a large concert to counter global warming. He also attracted attention in Japan for urging people in a tweet to sign a petition calling for a halt to land reclamation work in the Henoko district of Nago in Okinawa Prefecture for the relocation of a U.S. air station.

“We have abused our planet so badly. ... It’s time to completely start again. We have to reassess how we behave,” May said. “I spend a lot of time now campaigning for animals to be treated with dignity and respect. It’s about the planet and all the species that live on it, and we have made a terrible, terrible mistake. ... So, it’s time to start again.”

A special event titled “Queen Exhibition Japan: Bohemian Rhapsody,” which offers visitors an opportunity to trace the history of Queen, opened in mid-January. It is currently running at the ASOBUILD in Yokohama until Mar. 22 and will move to the Osaka Takashimaya Department Store (Mar. 25~April 6) and the Matsuzakaya Department Store in Nagoya (April 18~May 10).