Demon legend connects manga and its fans with shrine in Beppu 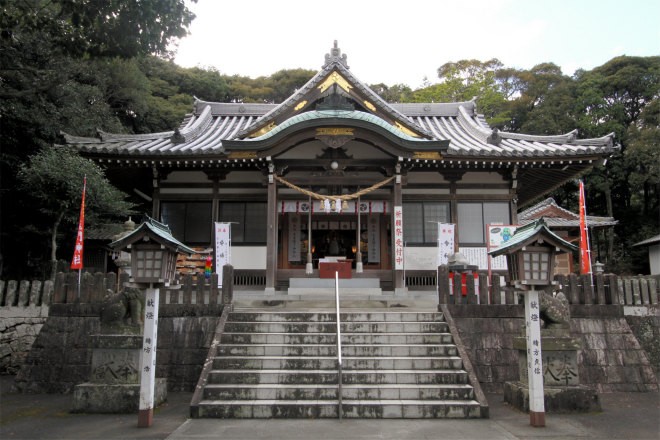 The main hall of Hachiman Kamado Jinja shrine, which contains the same name as the protagonist of “Demon Slayer,” Tanjiro Kamado, stands in the Uchikamado district of Beppu, Oita Prefecture. (Satoshi Juyanagi)

BEPPU, Oita Prefecture--Hachiman Kamado Jinja shrine, locally known as a site for praying soccer players, is now attracting hordes of manga fans partly because of its association with human-devouring demons.

The new visitors have found a number of similarities between the Shinto shrine and “Demon Slayer: Kimetsu no Yaiba,” a wildly popular manga series written and illustrated by Koyoharu Gotouge.

Although the story takes place in Tokyo’s Asakusa and Yoshiwara districts, no other locations are specified.

However, readers believe the shrine is a locale of the story and have made the site a “holy place.” Enthusiasts dedicate wooden “ema” prayer tablets illustrated with manga characters there and share their findings that connect “Demon Slayer” with the shrine.

Set in the Taisho Era (1912-1926), the manga centers around Tanjiro, whose family was killed by an “oni” demon and whose younger sister, Nezuko, has turned into an oni. He fights demons as he searches for a way to make his sole remaining family member human again.

The protagonist’s surname is also Kamado.

One of the more popular connections is Hachiman Kamado Jinja shrine’s relations to a legend involving an oni.

According to a summary of the legend, the deity Hachiman was asked by people to destroy an oni that lived in their neighborhood and ate people night after night.

He promised the demon that he would offer a human sacrifice every year if the oni could build 100 stone steps in one night. Hachiman also told the demon not to return to the village if it failed.

When the oni finished building the 99th step, the day broke and it ran away.

An object known as the ‘stone sandal” on the shrine grounds appears to be a footprint with three toes supposedly left by the oni when it fled as the sun rose.

Demons featured in the manga die when they are hit by sunlight.

In addition, sharp-eyed visitors have noticed that a picture of a dragon on the ceiling of the shrine’s main hall resembles the one that appears when Tanjiro delivers his special attacks.

The comic book series boasts more than 40 million copies in print, including digital editions, according to the publisher.

Hachiman Kamado Jinja shrine is considered the birthplace of Nitan, a mascot for the J1 soccer team Oita Trinita in the J.League.

It is also the place where the team prays for victory at the start of the new year.

The Kamado “kagura” (sacred Shinto music and dancing) is also performed in dedication to the shrine from New Year’s Eve to New Year’s Day.

OTHER SITES TIED TO MANGA

Fans have also flocked to Homangu Kamado Jinja shrine in Dazaifu, Fukuoka Prefecture, seeing it as another holy place.

“Kamado (hearth) is a word associated with the fire god,” Nishimoto said.

In “Demon Slayer,” another key character is Hinokami (the god of fire) kagura. The role has been performed by successive generations of the Kamado family at the beginning of the year.

Another popular sightseeing spot in Beppu that has come under the spotlight is a hot spring resort known as Kamado Jigoku (Hell of hearth). The step-building oni fled to the hot spring, and it supposedly serves as a gatekeeper after it reforms itself.

Hiroyuki Shuto, 50, a senior official of a company that manages the hot spring, learned about its ties to the manga after seeing people delighted to find a mask of a “tengu” goblin on display at the entrance.

They said it looked like Urokodaki, Tanjiro’s master in sword-fighting.

“It is up to fans to decide where their holy places are, and we have no say in that matter,” Shuto said, adding that he is happy to see an increasing number of young visitors to the resort.

Other sites in Beppu have drawn the attention of the manga fans, including a historical site believed to be a burial ground for the Kamado clan who had ruled the region.

Himeshima island, which is about 45 kilometers northeast of Beppu, is a major landing zone for chestnut tiger butterflies that also travel to the city. The migratory butterfly is believed to be the one featured in the manga.

Ryunosuke Kishimoto, a 22-year-old senior at Ritsumeikan Asia Pacific University (APU) in Beppu, frequently visits Hachiman Kamado Jinja and peruses publications to find connections between the manga and the local area. He publishes his findings on social media.

“From my experience of traveling around the world, I took a growing interest in Japanese culture, and I have also frequented Hachiman Kamado Jinja,” Kishimoto said. “I want to give shape to what I have studied, hoping that it could also return the favor to Beppu.”