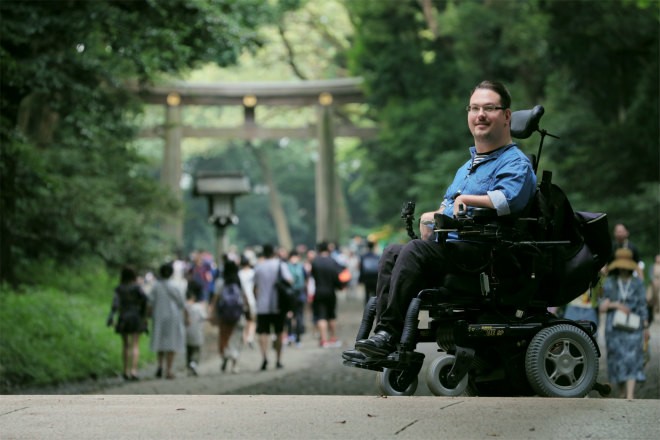 Editor’s note: The theme of Inclusive Tokyo is to explore the metropolis from the viewpoint of wheelchair users and people with disabilities. Tourism officials, with their sights set on the 2020 Olympic and Paralympic Games and an anticipated influx of foreign visitors, are working to make public transportation and popular destinations more accessible. In this series, Barry Joshua Grisdale, a 39-year-old Tokyo resident who uses a wheelchair, navigates iconic locations to assess progress in creating a barrier-free environment.

To pray for good fortune in the New Year, people in Japan routinely flock to temples and shrines in the first few days of January.

Tokyo's Meiji Shrine enshrines Emperor Meiji, who ruled from 1868 until 1912 and oversaw Japan's modernization drive, and his wife, Empress Shoken. It is one of the country's prime destinations for carrying out the annual custom.

For the past six years, the shrine, which will mark its centennial this year, has worked to make its facilities more barrier-free.

In 2016, it established 2-meter-wide paths with slates on both sides of the main approach to the main hall to accommodate wheelchair users.

The 900-meter-long gravel approach to the shrine’s worship hall used to be well-known as being a pain for wheelchair to navigate. The shrine took note after videos started appearing on YouTube illustrating the difficulties that people with disabilities were having.

Canadian-born wheelchair user Barry Joshua Grisdale, who prefers to be called Josh, visited the shrine in the capital's Shibuya Ward to get a firsthand look at the changes the shrine has been making to increase accessibility.

Though the shrine lies close to the bustling Shinjuku and Shibuya districts, it is tucked away in a forest environment that offers a soothing break from the frenetic pace of Tokyo.

After proceeding about 400 meters on pitched pavement, Forrest Terrace Meiji Jingu, formerly known as Meiji Jingu Bunkakan, comes into view. The complex includes a cafe and wedding hall, which have been equipped with multipurpose bathrooms.

The toilet seats are equipped with a backrest that assists helpers with positioning the body of a person using a wheelchair to help them change clothes.

Just off the complex, sake barrels from about 200 brewing companies are on display as offerings to the shrine's deities to pray for and give thanks for a bountiful rice harvest.

The barrels are a magnet for foreign visitors, who love to snap photos of their vividly colored motifs and upload them to Instagram.

Offerings from outside Japan are also on hand. Directly across from the sake are wine barrels given to the shrine from Burgundy, France.

It took Josh about 17 minutes in his motorized wheelchair to reach Minami-shinmon, the main entrance to the main hall, which has a slope designed for wheelchair users installed alongside the steps.

He was greeted by Moriyasu Ito of the Meiji Jingu Intercultural Research Institute, who gave him a tip on parking at the shrine.

“For visitors in wheelchairs, I recommend using the shrine’s No. 3 parking lot, located on the east side of the main hall,” Ito said.

Parking there is free.

From the lot, wheelchair users can get to the shrine safely using the slate-paved pathways, Ito said.