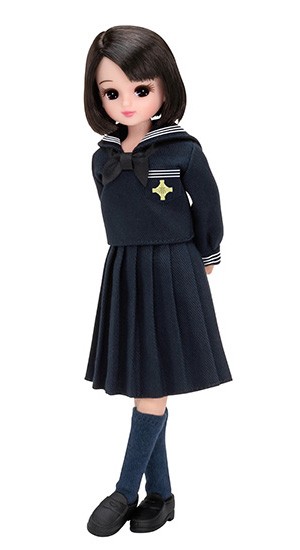 The project was initiated by Ohokai, the alumni association of the prefecture-run Hokota Second High School.

The order deadline is April 30.

Sailor-style dresses were adopted as the school uniform in 1946, according to school officials.

The institution became a co-ed high school in 1995, before merging with the Hokota Agricultural High School in the 2018 academic year.

Salat, based in Himeji, Hyogo Prefecture, has handled dolls dressed in the uniforms of 34 schools in 16 prefectures.

It can now add Ibaraki Prefecture to the list.

The emblem of Hokota Second High School features Mount Tsukubasan, a “hoko” spear, a rice paddy and a bobbin.

It will appear on the chest of the doll’s uniform, which comes in both summer and winter versions.

Ohokai is headed by Hisako Hashimoto, 79. Her husband, Sanai, also 79, was the 19th principal of the school. The couple’s eldest daughter graduated from the school.

“The project obtained unanimous approval at a general meeting of the alumni association,” Hashimoto said. “We once made a ‘furoshiki’ (traditional wrapping cloth), but it can’t be left spread out at all times. We can keep the doll on display. I’m glad that the uniform remains the same as the one we had worn.”

Only 2,000 units will be available, and sales are limited to five dolls per person.

Shipping is scheduled for late January 2021.

To place an order, visit the exclusive website at (https://salat.club/licca/hokotadaini/).