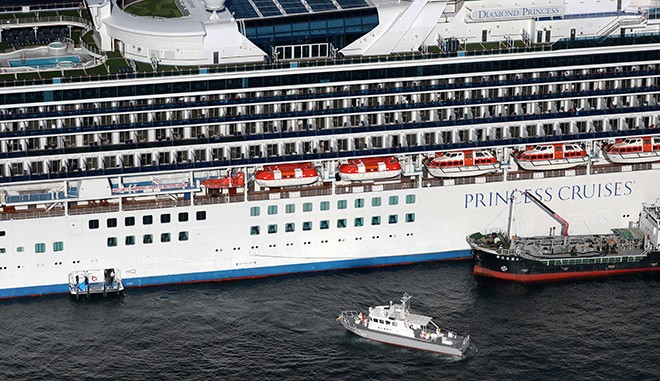 A Japan Coast Guard boat, center, ferries infected passengers and crew members from the cruise ship Diamond Princess, which is anchored off Yokohama Port, at 9 a.m. on Feb. 5. (Shiro Nishihata)

YOKOHAMA--Health authorities, in a sharp reversal of policy, extended the quarantine period for a cruise ship anchored off this port city by at least 14 days after 10 people aboard were confirmed to be infected with the deadly new coronavirus.

The Diamond Princess had been expected to begin discharging its 3,711 passengers and crew from Feb. 5 at the earliest.

Health ministry officials were racing to contain the virus after it was revealed that an infected passenger who disembarked in Hong Kong late last month had tested positive.

After leaving the ship, the 10 patients were taken by ambulance to four hospitals in Kanagawa Prefecture specializing in the treatment of infectious diseases.

The infected men and women range in age from their 50s through 80s, according to the ministry. Three of them are Japanese: a woman in her 50s and a man and a woman in their 60s.

It marked the first confirmed case of a group infection in Japan of the pneumonia-causing virus.

Officials were bracing for a surge in the number of cases as the results were based on tests done on 31 people. The ship carried 2,666 passengers and a crew of 1,045.

Samples were taken from 120 potential patients who were showing symptoms of the disease, such as running a fever and coughing, as well as 153 who had been in close contact with them.

Health authorities found that 36 people had been in close contact with the man from Hong Kong. Two of them were confirmed to be infected.

So far, the test results of 31 samples have been made available.

The ministry is moving to quarantine the passengers and crew members for about two weeks regardless of the absence of symptoms for clearance.

The Diamond Princess will remain near Yokohama Port during the quarantine, according to the operator of the cruise ship.

The ministry is considering testing senior citizens and those with  pre-existing conditions for the virus as they constitute a group that is particularly vulnerable to the infectious disease.

Aside from Japanese, Chinese and Taiwanese, more than 50 nationalities are represented in the passenger and crew manifest. Of the 2,666 passengers, 1,281 are Japanese.

The Diamond Princess was also placed under quarantine during a stopover in Naha, Okinawa Prefecture, en route to Yokohama. The health ministry took the unusual step of placing the vessel under quarantine a second time after it was alerted by Hong Kong authorities on Feb. 1 about the man in Hong Kong.

They said the 80-year-old man visited Shenzhen in China's Guangdong Province for a few hours on Jan. 10 and returned to Hong Kong, where he took a flight to Tokyo on Jan. 17. The man boarded the ship at Yokohama on Jan. 20, and arrived back in Hong Kong on Jan. 25 and disembarked. His infection was confirmed when he visited a hospital after developing fever on Jan. 30.

When the ship stopped at Kagoshima on Jan. 22, the man took a bus tour of Kagoshima Prefecture.

Ministry employees boarded the vessel to begin testing for infection on the evening of Feb. 3. Passengers without symptoms were initially expected to be allowed to disembark on Feb. 4. But it was postponed to Feb. 5 or later, and now by another two weeks.

One passenger told The Asahi Shimbun over the phone that the captain of the ship used the intercom around 6:30 a.m. on Feb. 5 to instruct guests to remain in their cabins. The captain spoke in English, which was translated into Japanese by an interpreter.

Passengers were notified about the 10 cases of infection and the 14-day quarantine in an announcement made around 8:10 a.m., the man said. When he tried to leave his cabin to get water, a crew member in the corridor rushed over to stop him.

Passengers are now obliged to eat in their cabins, not at the  restaurants. “I could move around the ship freely until yesterday, but things are totally different now,” he said. “Two weeks is a long time.”

A 75-year-old man from Matsuyama, Ehime Prefecture, who is aboard the ship with his wife, expressed concern that his medication for a heart condition and other health problems will run out after three days.

He said he is desperate for information as he could watch only some TV programs.

(This article was compiled from reports by Shuichi Doi, Daisuke Yajima and Shingo Tsuru.)