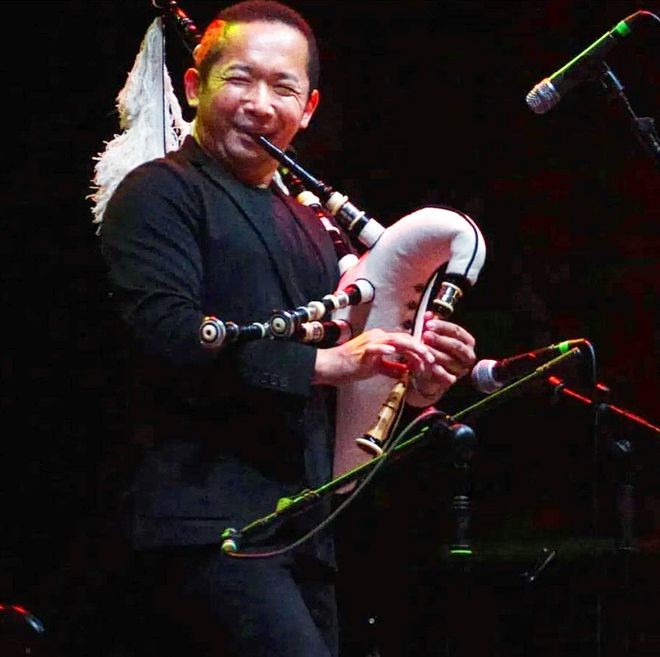 Yuki Kojima performs at the music festival in Spain in July. (From Yuki Kojima’s website)

AMA, Aichi Prefecture--Yuki Kojima is justified in blowing his own horn, following his victory in a Spanish music festival while playing the "gaita" bagpipe and is now preparing for a tour of Spain.

Kojima, 34, became the first Japanese gaita player in July to win the Festival de Ortigueira, a Celtic music festival, which has a competition for individual players.

He will receive an invitation from the festival organizer to perform at this year’s event as a special guest and also plans to embark on a tour of Spain.

“I’m glad that my performance received recognition,” Kojima said. “But that’s not my goal. Bagpipes are little known to Japanese people, so I want to tell people how wonderful the instruments and their music are. And above all, I want to give a performance that the audience will enjoy.”

Kojima belongs to Office Performance Lab, an event company based in Nagoya. His passion is playing the gaita, a bagpipe played in Spain, which has a wide sound range and soft sounds, anywhere that he is invited.

He has performed at schools, hospitals, large commercial facilities, wedding ceremonies, main temple halls and on special event trains around the country.

At his stage performances, he lets the audience touch the gaita and performs with band members when requested to meet as many requests from his clients as possible.

“I’m trying to give the best performance I can because I want the audience to have a good impression of the bagpipe since many of them have never seen such a rare instrument,” Kojima said.

He also plays the hand organ and does juggling upon request.

Kojima started playing the bagpipe around the age of 20, when he was living in Tokyo. He was particularly attracted to the gaita. He first learned Scottish techniques for playing the instrument at a bagpipe teaching group in Tokyo.

After a while, he ordered a gaita from a studio in Spain. While visiting the studio to pick up the instrument, he learned that there was a gaita teacher and took lessons from the teacher for about a month.

Since then, he has honed his skill in playing the gaita during a one-month annual stay in Spain while making a living as a street performer. He continued doing so even after moving his base to Aichi Prefecture five years ago.

Kojima placed second at the Festival de Ortigueira in 2017 before winning it in 2019.

Applicants upload a recording of their performance on the website and undergo first and second screenings. Kojima came in the top three after passing those screenings and played nine songs on stage for a total of 45 minutes in July.