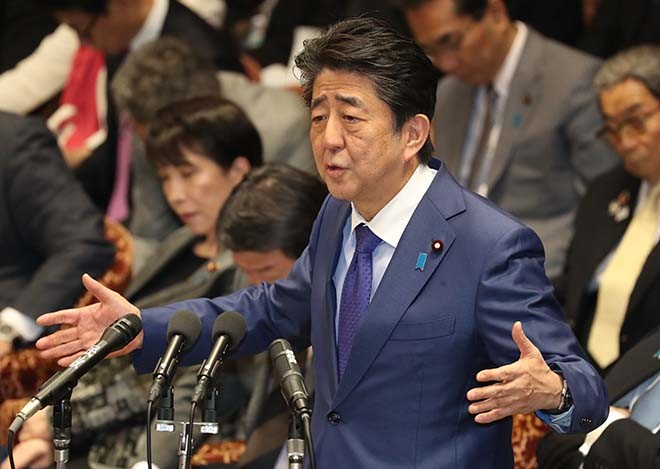 Backed into a corner, Prime Minister Shinzo Abe changed his long-held position and finally admitted that his local office made the agreement with a luxury hotel to host a dinner party for his supporters.

The prime minister until Feb. 5 had insisted that the 800 or so guests, who each paid 5,000 yen ($45) to attend the reception in Tokyo last year, were the ones who entered the agreement with the hotel regarding the cost and other matters.

That’s why, Abe had said, revenues and expenditures covering that party were never included in the political fund report for the local party branch that he heads.

But an apparent slip-up in his explanation led to his admission at the Lower House Budget Committee on Feb. 5 that his office made the agreement with the hotel, including arrangements to set the price for each participant at 5,000 yen.

“If such an agreement had not been reached, we would not have been able to inform the participants what the fee was,” he said.

The price has been described as much lower than the usual fees charged by that hotel.

The dinner reception was held on the eve of a cherry blossom viewing party that Abe hosted in Shinjuku Gyoen National Garden in Tokyo.

The Abe-hosted sakura parties funded by taxpayer money have been a focus of opposition parties’ criticism for months. They say Abe has wasted public funds by using these parties to wine and dine supporters of his and the ruling Liberal Democratic Party.

Adding to the controversy is the government’s insistence that all lists of invitees to those parties have been destroyed.

For the event in spring last year, hundreds of Abe supporters flew in from Yamaguchi Prefecture to attend both the hotel reception and the cherry blossom viewing gathering the following day.

Abe had said the participants paid their fees directly to the hotel, and his local office did not receive any revenues or make any expenditures for the event that would have to be included in its political fund report.

However, Hiroshi Ogushi, a member of the opposition Constitutional Democratic Party of Japan, touched upon a comment made by Abe in the Diet on Jan. 27. The prime minister said the contract with the hotel was designed so that no problems would arise if participants made last-minute cancellations.

Ogushi asked Abe if such an arrangement meant that his local office was the one that had entered the contract with the hotel.

Abe then revised his earlier comment and said his local office had to enter the agreement with the hotel because it mediated the event.

Yoichiro Hamabe, a professor of civil law at Aoyama Gakuin University in Tokyo, said Abe’s earlier claim that the participants were the main agent in the contract was unacceptable.

“The fundamental point of civil law is to recognize a contract has been concluded based on an agreement made by the relevant parties,” Hamabe said. “An agreement equals a contract.”