‘Maiko’ train returning to Gifu in March after 2-year hiatus

Nagaragawa Railway Co., based in Seki, Gifu Prefecture, will bring back the “maiko” train in March for the first time in two years. An apprentice geisha will entertain passengers with dance performances. (Yoshinobu Itakura) 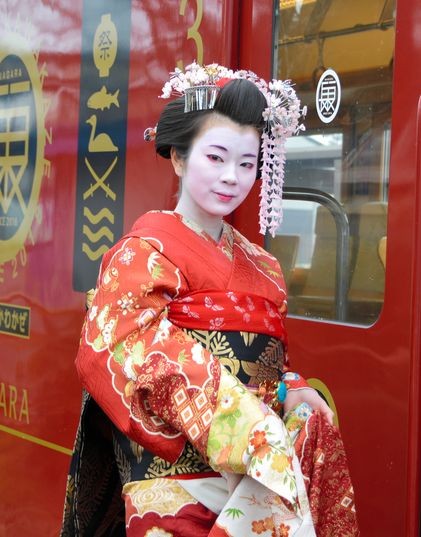 Kirin, a rookie “maiko,” will entertain passengers on a special sightseeing train in March. (Yoshinobu Itakura)

The train car’s seats face each other for events and other activities.

The Seki-based railway company operated the maiko train for two straight years since 2017 to increase ridership during passenger-scarce winter season. Although the service was well-received, it was suspended last winter because no maiko was available.

But this winter, Nagaragawa Railway secured a rookie maiko named Kirin for the special service for the first time in two years.

Kirin, 20, is a member of Hosen Giren, a Gifu-based geisha agency that dispatches performers to cormorant fishing boats on the Nagaragawa river and other places to entertain guests.

She started her maiko training in September last year and is set to make her official debut in February.

Born in Aichi Prefecture, Kirin is a sophomore at a college in Gifu Prefecture.

“I want to tell many people good things about Gifu when the prefecture is featured in the Taiga period drama,” Kirin said, referring to annual yearlong historical drama series on Japan Broadcasting Corp. (NHK).

The Obento Plan package is offered in the train departing from Seki Station and arriving at Gujo-Hachiman Station. It comes with a kaiseki lunch box prepared by a traditional Japanese restaurant in Mino and contains ingredients from areas along the line.

The Horoyoi Plan package, served in the train leaving from Gujo-Hachiman Station and arriving at Seki Station, includes two bottles of locally brewed sake and snacks.

The project was made possible through a collaboration by Organ, a Gifu-based nonprofit organization that supports community development, an association of local governments founded to promote local areas along the Nagaragawa river, and Hosen Giren.

“We really want people to learn about the sightseeing train when Gifu has come under the spotlight with the Taiga period drama,” said Yasunobu Iwata, 63, chief of the section in charge of attracting tourists at Nagaragawa Railway’s transportation department. “Geisha entertainment is expensive, but the maiko train is reasonably priced. We hope women and young people also use the service.”

The train has a maximum capacity of 25 passengers. Each package comes with a one-day pass that allows passengers to transfer to regular trains running between Mino-Ota and Seki stations.

For more information, visit the operator’s official website at (http://www.nagatetsu.co.jp/).