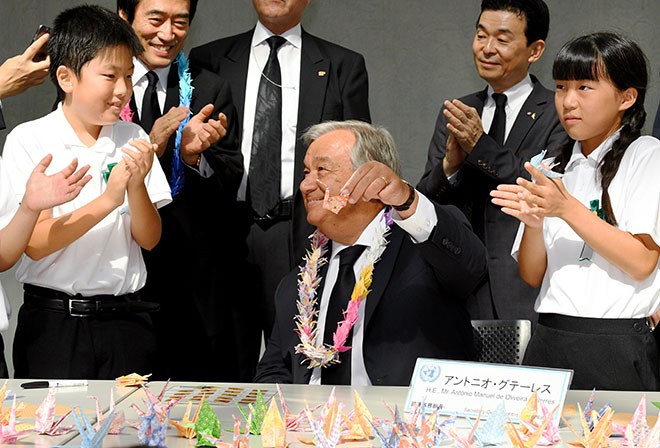 U.N. Secretary-General Antonio Guterres folds a paper crane at the Nagasaki Atomic Bomb Museum in Nagasaki in August 2018 after learning how to make it from children. (Asahi Shimbun file photo)

United Nations Secretary-General Antonio Guterres plans to attend the Peace Memorial Ceremony in Hiroshima on Aug. 6, marking the 75th anniversary of the atomic bombing of the city.

Guterres made the announcement at a news conference in U.N. headquarters in New York on Feb. 4.

He will be the first incumbent U.N. secretary-general in a decade to attend the Hiroshima event. The last was Ban Ki-moon, who attended in 2010.

“Nuclear disarmament remains one of our key priorities,” Guterres said.

The secretary-general added that attending the ceremony “demonstrates not only my solidarity with Hiroshima, but my strong commitment to nuclear disarmament and nonproliferation.”

Hiroshima Mayor Kazumi Matsui on Feb. 5 told the media that he welcomed the attendance of Guterres at the annual ceremony.

“I'm so glad to hear that,” Matsui said. “I hope he will send a message that pushes world leaders to move forward toward creating a world without nuclear weapons.”

In August 2018, Guterres became the first U.N. secretary-general to attend the peace memorial ceremony in Nagasaki.