City lockdowns surge in China to contain spread of coronavirus 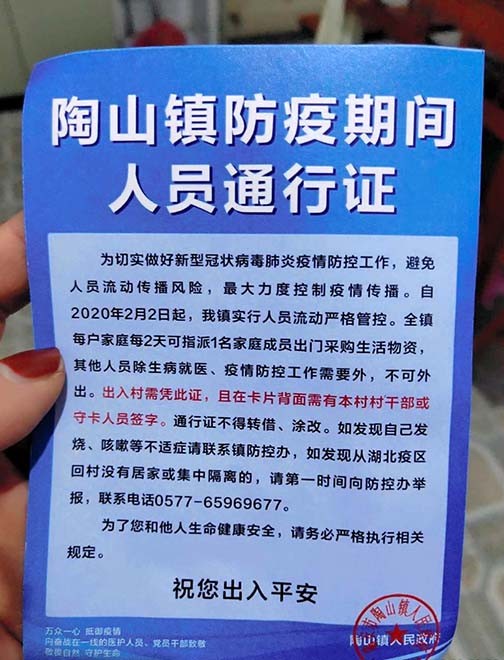 A pass that allows a resident of Wenzhou, Zhejiang province, to go out is shown on the Chinese social networking app WeChat on Feb. 5. (The Asahi Shimbun)

More Chinese cities are imposing 24-hour curfews and tightening restrictions on citizens, fueling concerns among residents who are already living in fear of the spreading coronavirus outbreak in the country.

Excluding municipalities in Hubei province, the center of the epidemic, 53 cities had imposed restrictions on movements of the public as of the late afternoon of Feb. 5, according to a tally by The Asahi Shimbun.

In Nanyang city in Henan province, where two people died from the virus, residents received a notice from authorities on their mobile phones and through other means on the evening of Feb. 3.

“We’ll start a ‘lock-down’ restriction from tomorrow,” the notice read.

A woman in her 30s in Nanyang said she was surprised by details of the restriction.

According the notice, only one member of each household is allowed to go out to buy daily necessities once every two days.

Residents, except for people who need to regularly see a doctor or are working to contain the virus, are banned from leaving their homes for other purposes, the notice said.

The following morning, city officials standing in front of residents’ associations in Nanyang ordered people to return home and checked on whether they were wearing masks.

The woman’s family hastily stocked up enough medicine and food to last for a while because they are prohibited from using their car to go out.

“The authorities are tightening restrictions day by day,” the woman said. “We don’t know when the restrictions will be lifted, so our concerns keep growing.”

The curfews started around Feb. 2, the final day of the Lunar New Year holiday, around the country, including part of Chongqing city and Kunming, Yunnan province.

Many of the locked-down cities are in Zhejiang province, which has seen a surge in coronavirus cases. Restrictions have also been tightened in areas where virus-related deaths have occurred, such as Heilongjiang and Hainan provinces.

Wenzhou in Zhejiang province was among the first cities outside Hubei province to impose a curfew on its residents.

Wenzhou Mayor Yao Gaoyuan, appearing on a TV program on Feb. 2, said the number of infection cases in the city has surged after about 20,000 people returned home from Wuhan, Hubei province, since before the Lunar New Year holiday period, which started on Jan. 24.

He sought the public’s understanding for issuing the curfew.

“It may be a tough measure to restrict the movement of citizens and their gatherings, but I want to quote the old saying that goes, ‘Being strict is love and being generous is harmful.’”

(This article was written by Kanako Miyajima in Shanghai and Takashi Funakoshi in Beijing.)