Historic artifacts from prewar Okinawa to be returned 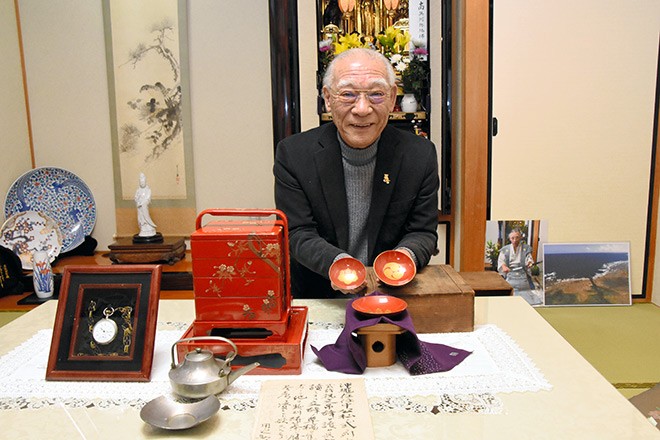 SAGA--Sake cups associated with the royal family of the Ryukyu Kingdom and other artifacts that are now in private possession are to be returned to Okinawa as a gesture to fill a cultural void caused by the destructive blaze at Naha’s Shuri-jo Castle last October.

Yonosuke Saito, 73, decided to donate the items as a large number of cultural properties from the prewar period were destroyed in the Battle of Okinawa in 1945, and more recently during the fire.

“I hope the items will provide spiritual support to Okinawans," he said.

The Saito family was samurai stock who served the Nabeshima clan in the Saga domain. Successive heads of the family were named Yonosuke, and Saito is the 14th-generation Yonosuke.

The items being returned to Okinawa were collected by the 11th Yonosuke (1859-1933), Saito’s great-grandfather. They include a set of three sake cups, one bearing the family crest of Sho, Ryukyu’s royal family. The others are adorned with the symbol of the Japanese government.

They are believed to have been presented to guests at a garden party organized by the Sho family in 1883.

When Saito attended an event on Okinawa’s Kumejima island two years ago to commemorate a successful evacuation of residents orchestrated by his great-grandfather in 1903, he took the collection of sake cups with him.

Kazuyuki Hokama, chief curator at the Okinawa Prefectural Museum and Art Museum in Naha, asked Saito to donate the “first-class” cultural assets that had survived to the prefecture.

“Objects from the prewar period are extremely significant because so many were lost in the Battle of Okinawa,” said Hokama, 52.

Over the years, Saito contributed 470 items of cultural significance to Okinawa and elsewhere, but has used the cups, Okinawan lacquer tiered food boxes and a tin sake server for New Year festivities with his family members.

After the blaze last year that destroyed countless documents, artworks and craftwork, he decided to donate the artifacts to “offer as much encouragement as possible for Okinawans.”

Hokama described the sake cups as having especially high value, given that they were presented at a social function that took place several years after the Ryukyu Kingdom was incorporated into Japan.

“The sake cups are interesting as the symbols of the Sho family and the Japanese government are both represented,” said Hokama. “They mirror Okinawa's changing fortunes.”

The donated items will go on display at the Okinawa Prefectural Museum and Art Museum from May 2 through June 21. The exhibition will also celebrate the achievements of the 11th-generation Yonosuke.

Saito's great-grandfather was a police officer when he moved to Okinawa in 1879. He later played a large part in regional development as a political leader, building ports and roads.

When volcanic Io-Torishima, Okinawa’s northernmost islet, erupted in 1903, he persuaded all 700 islanders to flee to Kumejima, 200 kilometers away.

A ceremony is held each year in February on Kumejima to commemorate the evacuation, and Saito's forebear is honored like a deity there.

The 11th Yonosuke lived in Okinawa until the early Taisho Era (1912-1926) and spent his final years in Saga.