Number of coronavirus cases on cruise ship surges to 61 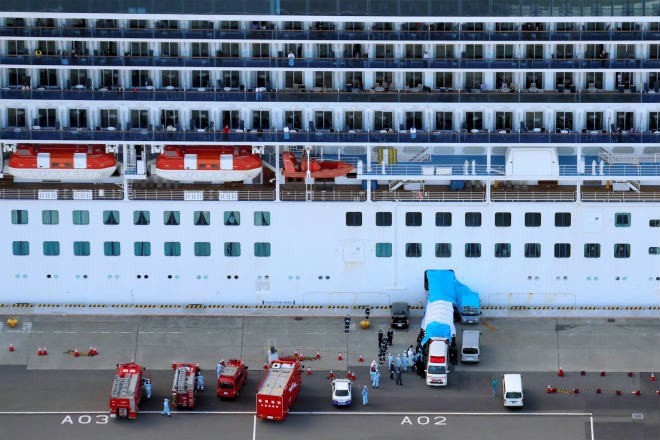 An ambulance waits for patients near the Diamond Princess cruise ship at Yokohama Port in Yokohama’s Tsurumi Ward on Feb. 6. (Hiroki Endo)

An additional 41 cases of the new coronavirus were confirmed on the Diamond Princess cruise ship, bringing the total to 61 for the quarantined vessel anchored off Yokohama Port, the health ministry said Feb. 7.

The new cases were found in the latest round of testing of 171 people among the 3,711 passengers and crew members on the ship.

Twenty-one of the 41 were Japanese, eight were from the United States, five were Australian, five were Canadian, one from Britain and one from Argentina. Thirty-five of the infected people were over 60 years old.

They will be taken to medical institutions in Tokyo, Saitama, Chiba, Kanagawa and Shizuoka prefectures.

Coronavirus tests were conducted on 273 people aboard who displayed symptoms such as fevers or coughing, as well as those who came in close contact with them.

Among first 102 people tested, 10 were confirmed infected on Feb. 5 and another 10 on Feb. 6. According to the ministry, one of the patients was in critical condition on Feb. 6.

WHO is broadening its recommendations for the use of masks

U.S. will allow limited flights by Chinese airlines, not a ban