EDITORIAL: Diet must keep vigilant watch on SDF operations in the Middle East 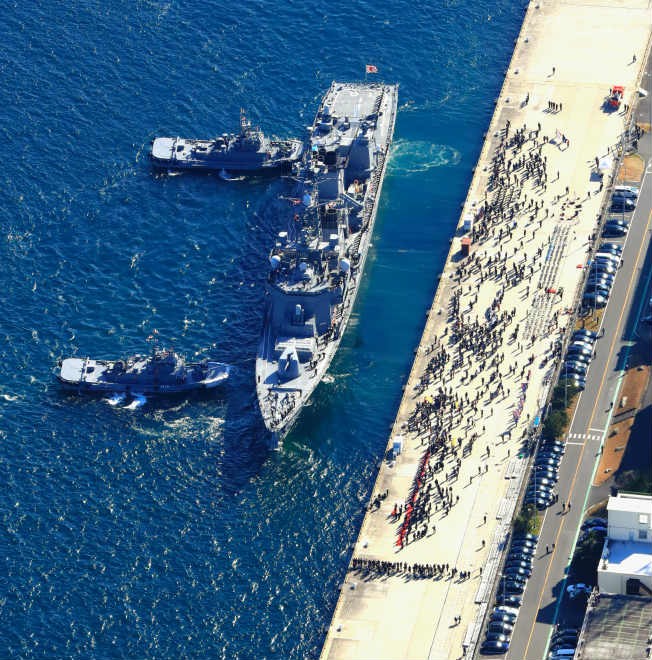 The Maritime Self-Defense Force destroyer Takanami leaves MSDF’s base in Yokosuka in Kanagawa Prefecture on Feb. 2 as families of the MSDF crew members and officials watch. (Rei Kishitsu)

A Maritime Self-Defense Force (MSDF) destroyer with a crew of about 200 has departed Japan on a risky and controversial intelligence-gathering mission in the Middle East.

Even before the departure, the mission has been dogged by serious questions concerning its objective and responses to possible emergencies.

The Diet needs to maintain vigilance in monitoring the SDF operations in the region, which is fraught with tensions and risks.

The destroyer JS Takanami sailed from the MSDF's Yokosuka base on Feb. 2. The warship is scheduled to arrive in the area of its mission in late February and start gathering intelligence to ensure the safety of tankers and other commercial vessels connected to Japan in the Middle East.

The Takanami will join the two P-3C MSDF patrol aircraft that left Japan on Jan. 11 for the nearly year-long assignment, which could be extended.

Never before has the SDF been involved in such a lengthy overseas mission under Article 4 of the law establishing the Defense Ministry, which stipulates “research and study” as one of the ministry’s tasks. The deployment is clearly based on a stretched interpretation of the law.

During Diet sessions, Prime Minister Shinzo Abe has pledged never to use this approach--overseas deployment of the SDF under the pretext of “research and study”--for a wide range of other cases. But he has also said the government will carefully examine and consider individual cases.

There is no ruling out the possibility that this mission may serve as a “precedent.”

Even though the government has decided to keep the Japanese mission independent of a U.S.-led international coalition to protect ships in the region, the SDF operations could still be regarded as being integrated with those of the U.S. forces.

Already, a MSDF officer has been assigned to a stint at U.S. Naval Forces Central Command based in Bahrain, which is responsible for the Gulf of Oman, Persian Gulf, Arabian Sea and other areas in the region, for sharing intelligence with U.S. forces.

The government has said there is no need at the moment for the SDF to guard commercial vessels related to Japan. If an unpredictable situation arises, however, the SDF and the government will face tough decisions that entail weighing the nature of the crisis and the scope of operations as defined by the relevant domestic and international laws.

The government has decided to allow the defense minister to order the MSDF vessel to engage in maritime patrol operations based on the SDF law if such action is deemed necessary to protect ships related to Japan. The SDF would be allowed to use arms in certain limited situations during such an operation.

But most of the Japan-related commercial ships to be supported by the mission are operating under a foreign flag.

The basic principle of international maritime law is that vessels sailing in the open sea fall under the jurisdiction of the countries where they are registered.

That means there is a limit to what the SDF can do to protect such ships. Unlike the MSDF’s anti-piracy mission off Somalia, the security threats the SDF will deal with in the Middle East are not clearly defined. This further complicates the mission.

SDF activities far from Japan are difficult to monitor closely from home. This is a lesson from the SDF’s peacekeeping operations in South Sudan.

The decision to dispatch the SDF to the Middle East, however, was made without any substantial Diet debate on the plan.

When the Cabinet made the decision at the end of last year, however, all that the government did was distribute the text of the decision among Diet members and convened a one-day off-schedule Diet session to discuss the matter.

This is no way to ensure effective monitoring of the mission by the Diet.

The current regular Diet session will last until June. After a certain period of the SDF operations in the Middle East, the government should submit a report on the activities to the Diet and answer questions.

It is, needless to say, also vital to carefully preserve the daily logs compiled and sent back to Japan by the SDF units involved for future review.

While full-scale armed conflict between the United States and Iran has been averted, for the time being, the chance of a confrontation between the two countries remains as high as ever.

If tensions between the two flare up again, one misstep could have serious consequences for the future of Japan.

Neither the government nor the Diet should ever forget the huge implications of dispatching the SDF, a military organization, to this volatile region.