Japan, fearing pathogen, calls on cruise ships to stay away 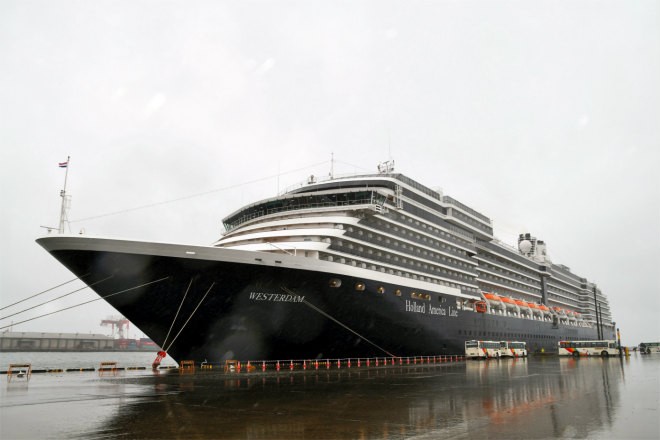 The Westerdam cruise ship calls at Kushiro Port in Hokkaido in May 2019. (Asahi Shimbun file photo)

Prime Minister Shinzo Abe issued orders to bar foreign nationals on the cruise ship heading toward Okinawa Prefecture from entering Japan based on the possibility that someone aboard is infected with the new coronavirus.

The Westerdam cruise ship was scheduled to dock at Naha Port on Feb. 8.

After a Cabinet meeting on Feb. 7, transport minister Kazuyoshi Akaba said he requested the Westerdam ship not to stop in Okinawa Prefecture.

He also said he instructed port and harbor operators across the nation to ask large cruise ships to avoid Japanese ports if any of their passengers are suspected of being infected with the coronavirus.

Abe announced the measures at a Feb. 6 meeting of a government task force at the prime minister’s office.

A government official said the prime minister made the decision with “his strong will” after learning about additional coronavirus cases on the Diamond Princess cruise ship now docked and under quarantine at Yokohama Port.

The measures to tighten border controls, based on the immigration control law, took effect on Feb. 7.

Five Japanese are on board the Westerdam cruise ship, and the government plans to take protective measures for them when they are in Hong Kong.

According to the Marine Traffic website, which provides positions of ships, the Westerdam since mid-January has stopped in Singapore, Thailand, Cambodia, Vietnam, Hong Kong and Taiwan. It departed the southern Taiwanese city of Kaohsiung on Feb. 5.

Some countries have reportedly denied the ship entry to their ports.

Japan on Feb. 1 started imposing a blanket ban on entry by foreign nationals who have visited the Chinese province of Hubei during the past two weeks and those whose passports were issued by the province.

The capital of Hubei is Wuhan, the epicenter of the coronavirus outbreak.

Only in special cases will such foreign nationals be allowed into Japan.

The Immigration Services Agency of Japan said it has refused entry to 16 foreign nationals by Feb. 5, while four others canceled their entry applications on their own.

Nineteen were permitted to enter the country based on special reasons.