VOX POPULI: For added protection, try having a bar of soap handy 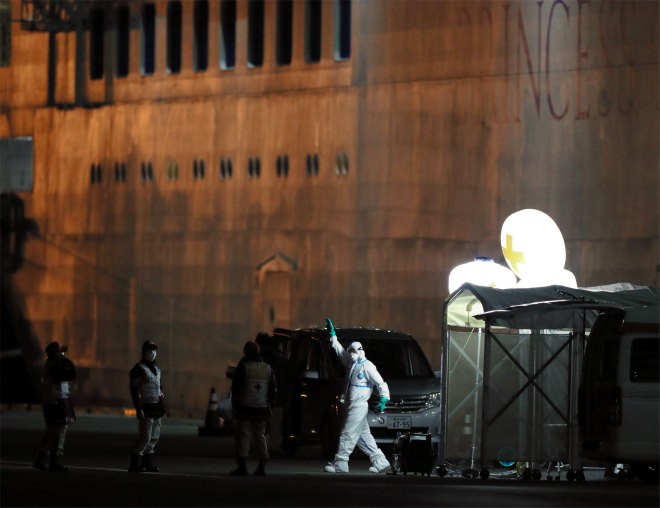 Five days have passed since the cruise ship Diamond Princess was quarantined off Daikoku Pier in Yokohama Port.

Viewed up close, the vessel was much more imposing than I had expected. The impression I got was that of a high-rise building lying on its side.

Few people could be spotted on the decks, as most passengers are apparently required to remain in their cabins.

The vast parking lot abutting the pier was virtually empty. The only cars that pulled in from time to time had to be those of passengers' kin bringing medicines.

More passengers tested positive for the new coronavirus on Feb. 7. The anxiety and the inconvenience everyone on board must be going through defies imagination.

According to a statement on the official website of Tohoku University Medical School, Japan's medical system needs to be shored up around the nation "on the premise that the infection will spread."

The author is Hitoshi Oshitani, a professor of virology who dealt with the SARS (severe acute respiratory syndrome) outbreak that occurred in 2002 and 2003.

Japan now ranks second in the world in the number of confirmed cases of coronavirus infection. Has the nation already passed the stage of stopping the virus at its border, and is it now time to fight it on Japanese soil?

Oshitani urged authorities to consider what role Japan can play in this global crisis, instead of just fretting about its potential impact on the Tokyo Olympics and Paralympics this summer.

In the meantime, news from the United States concerns another infectious disease, namely, influenza.

More than 10,000 people are estimated to have died in the current flu epidemic, and the toll is expected to keep rising. Concerns are being raised that the new coronavirus has diverted the public's attention from flu, which may be inevitable, unfortunately, because people do tend to overreact to any new disease.

What each one of us can do to prevent contagion is limited. But it's a start, at least, to reject discriminatory and misguided thinking and heed what professionals have to say.

And handwashing is just as effective against flu as well as coronavirus infection. It's actually not a bad idea to carry a bar of soap at all times.