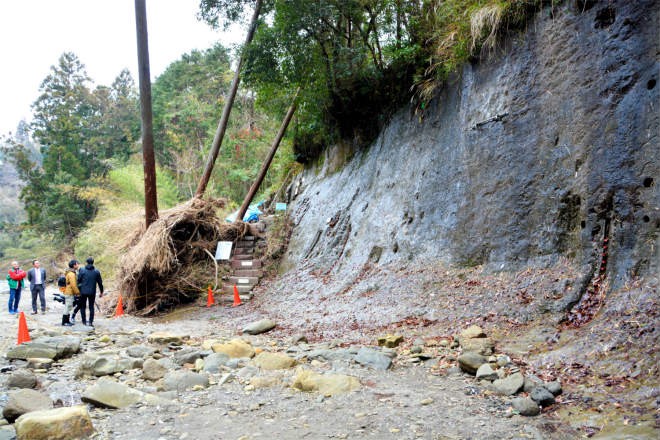 An area in Ichihara, Chiba Prefecture, that led to "Chibanian" being selected as the name for the geological period between 129,000 and 774,000 years ago. Chibanian means China age. (Tabito Fukutomi)

An international group of geologists formally adopted "Chibanian" to describe a geological age spanning 774,000 to 129,000 years ago. Named after the prefecture outside Tokyo, Chibanian means "Chiba age" in Latin. It marks a period during the Pleistocene epoch when Earth was inhabited by Neanderthals and mammoths.

The International Union of Geological Sciences (IUGS) chose Chibanian after scientists recognized that stratum discovered in Ichihara, a city in the prefecture, clearly shows the beginning of the geological time period.

This is the first time a Japanese name has been used to describe the timing and relationships of events that have occurred during Earth's 4.6-billion-year history.

Chibanian also marks the second formal scientific name containing a Japanese element, following Nihonium (named after Nihon, or Japan), a synthetic chemical element with the atomic number 113 discovered by a team of researchers at Riken, a scientific research institute in Japan.

Earth's geological history is divided into 100 or so ages, which are based on major phenomena, such as climate change and the extinction of life. Most of the ages were named after places where key strata was discovered, mainly in Europe. For example, the Jurassic Period between 150 million and 200 million years ago, when dinosaurs roamed the planet, was named after the Jura mountains, which now serve as the national border between France and Switzerland. The Cambrian Period between 490 million and 540 million years ago, when a large variety of new creatures, including trilobites emerged, was named after the Latin name for Wales.

The Chibanian began with the last reversal of Earth's magnetic poles.

The North and South magnetic poles changed many times in the past, the last time being 770,000 years ago. The section in Chiba offers one of the best records of the event. That is the reason Japanese researchers, including those at the National Institute of Polar Research and Ibaraki University, recommended to the IUGS that this period be named Chibanian.

Similar strata were also found in Italy, but a number of assessments by the IUGS determined that the Chiba stratum, which lies in a cliff along the Yorogawa river, more clearly shows signs of the last geomagnetic reversal.

This geologic phenomenon was first surmised by Motonori Matsuyama (1884-1958), a Japanese geophysicist at the Kyoto Imperial University (forerunner of Kyoto University).

Nearly a century has passed since Matsuyama published his theory about past reversals of Earth's magnetic field.

Naming a geological time period after a Japanese prefecture was made possible by the cooperative efforts of many researchers in a wide range of fields to accumulate related data.

It should also be noted that the Chibanian project was helped by local cooperation and support. Local governments supported the bid by establishing ordinances and purchasing land around the area where the stratum was discovered.

Local residents also played a role by developing a tour route and serving as tour guides. The success is a product of effective cooperation between the academic and local communities.

Geology is a science that deals with the history of Earth, especially as recorded in rocks, and an intriguing intellectual undertaking.

The Chibanian could inspire the interest of many young people in geology and thereby help bolster education and research in this field of science.

From this point of view, the Ichihara municipal government has done a good job by building a provisional facility to exhibit fossil specimens and information panels.

Local authorities should continue working with researchers to expand and improve the exhibits to pique and satisfy the curiosity of tourists and geology buffs alike.

What is even more important is to make sure that the precious stratum will be preserved and handed down through generations as an important legacy of the history of Earth.

When the region was pounded by a powerful typhoon last autumn, the river rose to dangerous levels, causing part of a staircase for visitors to be swept away.

Every possible effort should be made to prevent the stratum from being damaged by a natural disaster or vandalism.