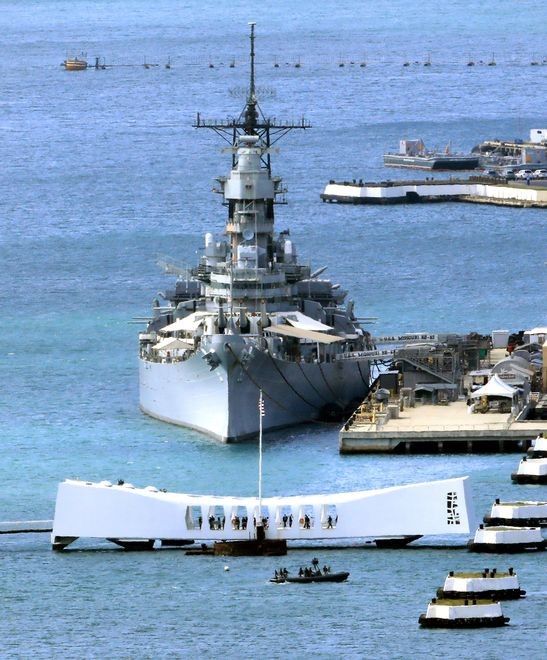 An atomic bomb exhibition will be held in summer 2020 at the Battleship Missouri Memorial, background. In the photo taken in 2016 at Pearl Harbor in Hawaii, the long building of the USS Arizona Memorial can be seen in the foreground. (Asahi Shimbun file photo)

Officials of Hiroshima and Nagasaki hope an upcoming exhibition at the Battleship Missouri Memorial in Honolulu showing the devastation unleashed by the atomic bombs will "convey the significance of peace beyond nationalities."

It will be held on the 75th anniversary of the dropping of the atomic bombs, and the first at the battleship, on which Japan officially surrendered to end World War II.

"It will have a historic importance to organize the event at the symbolic site of Pearl Harbor," said Takuo Takigawa, director of the Hiroshima Peace Memorial Museum. "We will show exhibits that can present the terrifying aspects of warfare."

The Pacific War broke out when Japan staged a surprise attack on Pearl Harbor on Dec. 7, 1941, and ended after Tokyo signed the surrender agreement on the deck of the USS Missouri on Sept. 2, 1945, following the dropping of the two nuclear bombs.

Terumi Tanaka, 87, a senior official of the Japan Confederation of A- and H-Bomb Sufferers Organizations, said he expects the planned exhibit to help deepen the understanding of the atomic bombings among Americans.

"One person told me in the United States that the atomic bombings were the price for the Pearl Harbor attack, but I explained their differences and the guy understood it," Tanaka said. "Holding an atomic bomb display at the iconic site of Pearl Harbor has great significance, and I hope the event will provide an opportunity to present facts objectively."

The exhibition will run from early July through September, according to Hiroshima city. Following the one at the Battleship Missouri Memorial, a similar exhibit is planned to be held at the University of Hawaii at Hilo through early October.

While what will be displayed has yet to be decided, 20 items from the Hiroshima Peace Memorial Museum and the Nagasaki Atomic Bomb Museum, such as images of the bombed-out ruins and badly burned survivors as well as clothing of victims and a melted cross, are under consideration.

Hibakusha atomic bomb survivors will also give talks of their experiences.

The landmark event has become a reality owing to the two Japanese cities' active efforts to share lessons from the catastrophe.

Hiroshima and Nagasaki have been organizing exhibitions to show the inhumanity of nuclear weaponry since 1995 in foreign countries. Starting in Washington, D.C., the display has been held on 59 occasions in 51 cities in 19 countries, including nuclear weapon-possessing Russia, France and India.

The latest show is now under way in Los Angeles.

At the Battleship Missouri Memorial, the farewell note of a kamikaze pilot and other articles were previously displayed. Michael Carr, president of the USS Missouri Memorial Association, and Kenji Shiga, then director of the Hiroshima Peace Memorial Museum, visited each other's facilities in 2017 and agreed to boost further cooperation.

In June last year, a paper crane created by Sadako Sasaki, who died of leukemia at age 12 a decade following the atomic bombing of Hiroshima, was donated to the U.S. memorial.

On top of that, Hiroshima and Honolulu are sister cities. Hiroshima Mayor Kazumi Matsui traveled to Honolulu last summer to celebrate the 60th anniversary of the establishment of the cities' friendship.

To coincide with his visit, a local group of former residents of Hiroshima Prefecture committed to cooperating to organize an event marking the 75th anniversary of the atomic bombing.

One of the objectives of the display planned for Pearl Harbor is changing how U.S. citizens view the atomic bombings of Hiroshima and Nagasaki.

In the United States, there is an entrenched argument to justify the nuclear attacks that insist the bombings contributed to an earlier end of the war and thereby helped reduce the death toll of U.S. soldiers.

In fact, a B-29 bomber known as the Bockscar, which dropped an atomic bomb on Nagasaki, is described as the aircraft that ended World War II at the National Museum of the U.S. Air Force near Dayton, Ohio.

In 1995, the National Air and Space Museum in Washington, D.C., which keeps the Enola Gay bomber that dropped the atomic bomb on Hiroshima, tried to hold an exhibit featuring the nuclear attacks to mark the 50th anniversary of the end of the war. However, retired U.S. military personnel and others effectively forced the museum to cancel the plan, criticizing the display as presenting the United States as the perpetrator.

In 2015, three sites for the Manhattan Project, which resulted in the development of the atomic bomb, were designated as national parks.

In response, the cities of Hiroshima and Nagasaki demanded that careful attention be paid so as not to strengthen support for the use of nuclear weapons. Although an atomic bomb exhibition was considered in Los Alamos, New Mexico, one of the former project sites, the plan has yet to come to fruition.

Although U.S. President Barack Obama and Japanese Prime Minister Shinzo Abe visited Hiroshima and Pearl Harbor, respectively, in 2016, the perceptual gap between the two nations has not been eliminated even 75 years after the atomic bombings.

When hibakusha talk about their stories in the United States, they are often peppered with the phrase "remember Pearl Harbor." That is because many U.S. citizens consider the atomic bombings as payback for Japan's surprise attack.

As the Pearl Harbor attack targeted military facilities but the indiscriminate atomic bombings killed many citizens, Hiroshima and Nagasaki see the use of nuclear weaponry as "absolutely wrong."