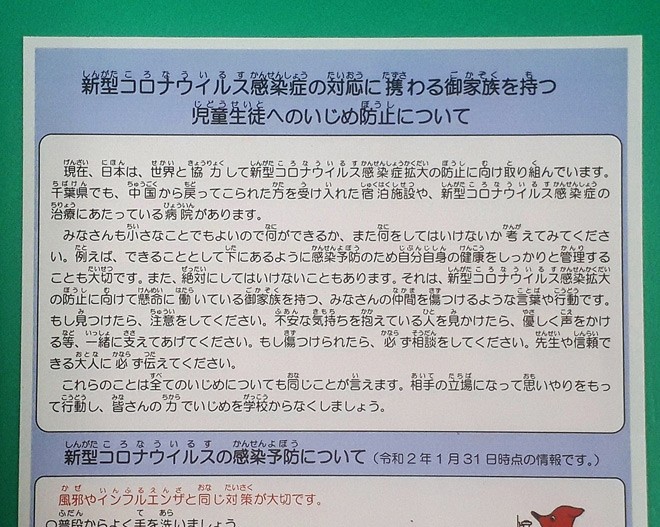 A notice for children issued by the Chiba prefectural board of education calls on them not to act in a way hurting their peers in connection with the infection by the new coronavirus. (Masafumi Ueda)

In an overreaction to the new coronavirus hysteria gripping Japan, some nursery schools and kindergartens are shunning Japanese children who have recently returned from China.

A Tokyo woman in her 40s said she was perplexed on Feb. 3 when told she cannot tour a kindergarten she asked to visit.

“If you are returning from China, you cannot,” a school official said.

Her family has lived in Guangzhou in southern China since a year and half ago due to her husband’s business.

She and her two children--a prekindergarten boy and girl toddler--returned to Japan on Jan. 5, ahead of the Lunar New Year holiday in China from Jan. 24 to Jan. 30.

Initially, she planned to return to China after a month or so. But she decided to remain in Japan longer as it appears it will be several months before the coronavirus epidemic is contained in China.

So the woman called a private kindergarten near her parents’ home to ask about her son enrolling from April.

Although a kindergarten official was initially supportive, the reception turned frosty after she mentioned they had returned from China.

“If you want to see our school, you can from outside the school fence,” the official said. “You can visit us after the kindergarten graduation ceremony in March.”

By all indications, it is clear she and her children are not infected by the new strain of coronavirus.

The virus’s incubation period is believed to be 12 and a half days.

A month after their return to Japan, they show no symptoms of pneumonia, such as a cough and fever.

Even though she told kindergarten officials that she would present the results of their medical checks and their passports showing the date of their entry into Japan, the officials would not budge.

“We have been treated like disease-causing germs,” she said.

In an interview with The Asahi Shimbun, the vice head of the kindergarten apologized for being unable to grant her request, and that they refused the visit to protect the children at the school.

The vice head said the school is concerned that kindergarten children’s exposure to potential risks may increase in February as many events scheduled for the month will bring a large number of visitors to the school.

Alerted by the woman, the local government with a jurisdiction over the kindergarten directed school officials to “appropriately handle the situation,” calling their refusal “a flagrant overreaction.”

A 38-year-old Tokyo woman who came back from Shanghai in late January described a similar chilly reception.

When she decided to put her 2-year-old son in a non-registered nursery school earlier this month, a school official told her that they cannot come unless she submits a document certifying that they are not infected with the coronavirus.

But the tests in Japan to rule out infection are limited to those who have visited the Chinese province of Hubei, where the outbreak began, in the past two weeks or had close contact with visitors from there.

The woman said a public health center declined to test people who have yet to display symptoms of the disease.

She said she and her son will hole up in their home for about two weeks.

In Chiba Prefecture, just east of Tokyo, the prefectural board of education moved swiftly in calling on teachers to watch closely to prevent prejudice against children returning from China.

About 180 Japanese evacuees have been staying in a hotel in the prefecture since they returned from Wuhan, the epicenter of the outbreak and capital of Hubei province, on an airplane chartered by the government in late January. The government booked the hotel.

The board is concerned with not only children returning from China but also that children of staff working at the hotel and a hospital treating patients of the contagious disease could become targets of prejudice by their peers.

Chiba education authorities are determined not to allow a repeat of the  bullying that occurred against children who evacuated from the 2011 Fukushima nuclear accident. Some children were bullied due to their potential exposure to radioactive materials.

The education ministry issued a directive for teachers from kindergartens through high schools in late January, urging them to be on alert against prejudice related to the coronavirus infection among children and be as flexible as possible in accepting students transferring from other schools.