A video posted by an Uber Eats deliverer shows a school bus squeezing into the bicycle lane and making a sudden stop in Tokyo’s Shinjuku Ward on Jan. 23. (Provided by Hikariman) 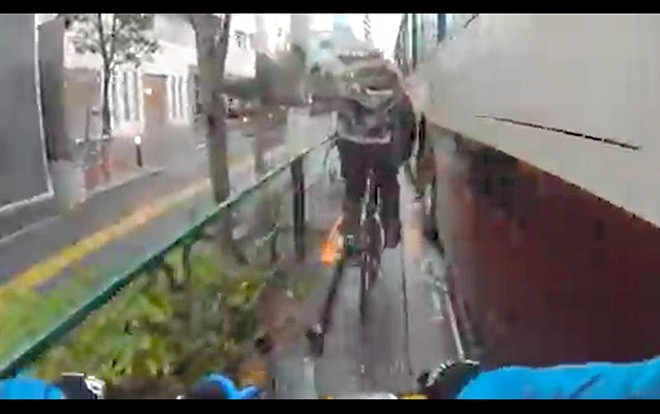 A video posted by an Uber Eats deliverer shows a school bus squeezing into the bicycle lane and making a sudden stop in Tokyo’s Shinjuku Ward on Jan. 23. (Captured from a video posted by a man)

A viral video of a heated exchange between an Uber Eats bicycle delivery man and a school bus driver over a close call on a busy Tokyo street has prompted debate about road safety.

The 27-year-old delivery man for the app-based food delivery platform shot the video of the incident and posted it on Twitter.

He held a news conference at the labor ministry’s building on Feb. 6, along with Uber Eats Union members.

He said the incident occurred when he was riding in the bicycle lane on Meiji-dori street in Tokyo’s Shinjuku Ward around 4:20 p.m. on Jan. 23 and waiting for the next delivery order.

After he cycled across an intersection, the school bus came from behind. When it overtook the bicycle, the bus encroached in the bicycle lane, leaving nearly no room for the delivery man to maneuver, he said.

“I was frightened because the bus came close, about 10 centimeters away,” he said.

He said he banged on the left side of the bus to give the driver a warning. The bus then immediately stopped, and the delivery man pulled up to the bus door, where the driver was standing.

The man recorded the incident with a camera mounted on the delivery bag’s shoulder strap. He posted the video on Twitter the same day under the account name Hikariman.

He also filed a report with the Metropolitan Police Department’s Totsuka Police Station on Jan. 29, accusing the bus driver of assault and traffic law violations.

In the video, the delivery man was heard cussing out the bus driver. His camera zoomed in on the driver and he said, among other things, “I will expose (the driver).”

Captions, such as “stress release,” had been added to the video.

Many responses criticized the bus driver and expressed sympathy for the delivery man.

But others reproached the cyclist for banging on the bus and other behavior.

The video also captured the name of an international school written on the side of the bus.

An operator of international school chains confirmed that the incident involved a bus company that employs the driver.

In a statement posted on its website as of Jan. 31, the school operator said the driver “made a dangerous overtaking of the bicycle and used rude language and behavior.”

The school apologized, adding that the bus company said it “will relieve the driver of his duty.”

At the news conference, members of the Uber Eats Union voiced concerns that bike deliverers “have been at risk on a daily basis from dangerous driving by those who have a wrong perception that bicycles should stay on the sidewalk.”

At the same time, the union admitted that the deliverers themselves often do not follow traffic rules and road etiquette. The union said it will work to improve on their road behavior from now.

“I hope that both cyclists and drivers check traffic rules once more,” the deliverer said at the news conference.

The union has urged Uber Eats deliverers to report job-related accidents on the roads. So far, the union has received 19 cases, including one accident resulting in a bone fracture.

The union said it will continue collecting and analyzing such information, and use the results to demand a better deal for deliverers from the Japanese arm of U.S.-based Uber Technologies Inc.