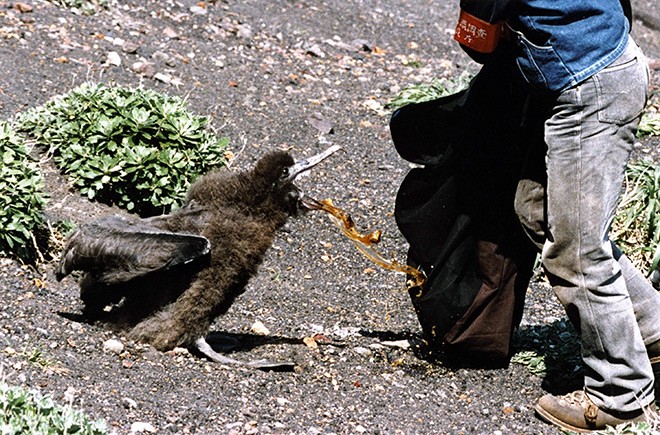 A human tries to approach an albatross to cover it with a cloth bag to put a leg ring on it, but the bird vomited garbage from its stomach. On Torishima island in the Izu island chain, many chicks accidentally ingest petrochemical products in floating garbage. The photo was taken in 1993. (Asahi Shimbun file photo)

Researchers have demonstrated that seabirds which consumed plastics accumulated the harmful substance in their livers and fat, raising an alarm about the dangers posed by marine plastic pollution.

The international research team, including researchers from the Tokyo University of Agriculture and Technology (TUAT) and Hokkaido University, tested the effects of feeding additive-laced plastic pellets to seabird chicks.

The accumulation of the additives in their livers and fat was 91 to 120,000 times higher in the chicks who ate plastic particles than those that didn't, researchers showed.

The team published the research results in the U.S. scientific journal Current Biology on Jan. 30.

In the research, the team added plastic particles, including five kinds of chemical additives, such as flame retardants and ultraviolet stabilizers, to five streaked shearwater chicks in their food.

Regarding the chemical additive’s concentration in the liver, fat in the body and fat secreted from the base of their tails, the team compared those five chicks with ones that ate food not containing plastic particles.

The team also researched fat from the bases of the tails of six species of seabirds in the Hawaiian Islands to determine to what extent wild seabirds are being impacted by plastic pollution.

Hideshige Takada, a professor at the Tokyo University of Agriculture and Technology, pointed out that the same kind of plastic pollutants could be found in fish and shellfish.

“Humans could eat the fish and shellfish polluted by plastic chemical additives,” he said.