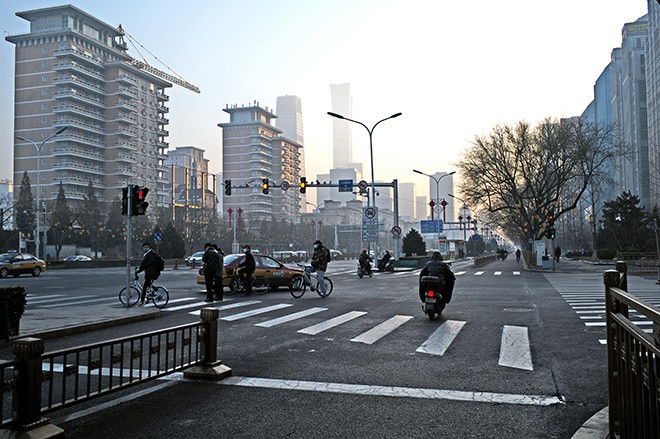 The normally busy morning commuting hours are relatively quiet in the center of Beijing on Feb. 10. (Naoyuki Fukuda)

Corporate activities resumed in major Chinese cities on Feb. 10 after coronavirus-related shutdowns were lifted, but empty streets and strict new restrictions showed the situation is still far from business as usual.

The shutdown of business operations, particularly in the globally vital manufacturing sector, had started about half a month ago when infections of the new coronavirus were increasingly being reported outside the outbreak’s epicenter in Wuhan, Hubei province.

The Chinese central government said at a Feb. 6 meeting that it would maintain the “normal economic and social order” while continuing its efforts to prevent the transmission of the virus.

“We have undertaken the task to resume operations at companies and factories in 30 provinces, except Hubei province,” a high-ranking official of the Chinese government economic agencies said at a news conference on Feb. 9.

These areas include municipalities directly controlled by the central government as well as autonomous regions.

Tesla Inc., a U.S. manufacturer of electric vehicles, resumed operations at a factory located in the Pudong Xinqu area of Shanghai on the morning of Feb. 10.

The Shanghai government had earlier announced that the Tesla plant would reopen under an extraordinary arrangement with the city.

But on Feb. 10, only about 40 shuttle buses, compared with the usual 100 or so, took employees to the factory, according to a driver.

In Guomao, a central business district of Beijing, worker turnout on Feb. 10 was far below the norm.

Many workers went home for the Chinese New Year holiday and have yet to return to the urban area.

Local governments have set various restrictions to prevent infections while many companies have urged employees to telework, contributing to the quietness in the capital.

The Beijing city government also issued a notice on Feb. 10, saying it would further tighten restrictions on travel to residential areas, check citizens’ temperatures and ensure that they are wearing face masks.

The Shanghai city government on Feb. 9 issued a notice to encourage workers to commute during off-peak hours.

The city government has also asked companies to help prevent the spread of the virus by not turning on heating systems that use the same ventilation route for an entire building or floor.

“It is tough working in an environment where we can’t turn the heater on at this time of the year,” an employee of a Japanese company that uses a central heating system said. “I told employees to dress warmly, but I can’t help worrying that they will catch a cold or pneumonia from the cold.”

Some companies have taken defensive measures that could hinder their and others’ business activities.

An office building in the center of Shanghai is requiring tenant companies to report in advance information about every employee who comes to work, such as where they have stayed recently and if they have a fever.

If an employee is infected, the entire company will be evicted, according to a document issued by the operator of the building.

“Although the ban on coming to work has been lifted, I am too scared to ask employees to return, considering the penalties in case somebody gets infected,” an employer of a tenant company said. “I will let them work from home for a while and see how things go.”

(This article was written by Kanako Miyajima and Naoyuki Fukuda.)